From ABC7: “The dangers made headlines in the early 2000’s when FDA and Congressional hearings were flooded with families who’d lost loved ones who had taken a class of antidepressants called SSRI’s. But now, time has passed and with it the public awareness of what drugs like Zoloft, Paxil and Prozac can cause a person to do. They’re still on the market and a whole new generation of parents is unaware of the deadly risks. […]

In a lawsuit Witczak brought against Pfizer, the maker of Zoloft, documents showed the company knew about particularly troubling side-effects — like patients feeling as though their heads were detached from their bodies and they were looking in.

A company memo tells Pfizer’s sales team that information was ‘not suited for distribution to general practitioners.’ […]

‘Kids are being given Zoloft for bedwetting, nail biting. Test anxiety? What child dies from test anxiety?’ said Mathy Downing. ‘In retrospect, we never should’ve given it to her at all.’

‘The whole system’s built on trust,’ said Witczak. ‘You go to your doctor, you trust that your doctor, whatever the doctor’s going to do, you trust their advice. And the doctor trusts that the FDA has done their work, so the whole system’s built on trust. And so when I’m out there, that’s one of my goals today is to try to get people to pay attention so they don’t come back afterwards and go “How come I didn’t know?”‘ 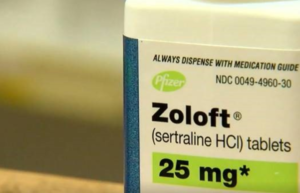