From Scientific American: “Renate Flens, a German woman in her 60s who suffers from depression, tells her psychotherapist that she wants to love her children but just can’t. She and the therapist soon realize that both Flens’s problems may be rooted in her frustration at being unable to allow others to get close to her. After lengthy conversations, they realize something else: a contributing factor may well be the child-rearing teachings of Johanna Haarer, a physician whose books were written during the Nazi era and aimed at raising children to serve the Führer. […]

Flens’s story, told to me by her therapist, illustrates an issue troubling a number of mental health experts in Germany: Haarer’s ideas may still be harming the emotional health of its citizens. One aspect was particularly pernicious: she urged mothers to ignore their babies’ emotional needs. Infants are hardwired to build an attachment with a primary care giver. The Nazis wanted children who were tough, unemotional and unempathetic and who had weak attachments to others, and they understood that withholding affection would support that goal. If an entire generation is brought up to avoid creating bonds with others, the experts ask, how can members of that generation avoid replicating that tendency in their own children and grandchildren?

‘This has long been a question among analysts and attachment researchers but ignored by the general public,’ says Klaus Grossmann, a leading researcher in mother-child attachment, now retired from the University of Regensburg. The evidence that Haarer’s teachings are still affecting people today is not definitive. Nevertheless, it is supported by studies of mother-child interactions in Germany, by other research into attachment and by therapists’ anecdotal reports. […]

‘Children like this—who are easily seduced, don’t think and don’t feel—are fodder for a nation bent on war,’ says Karl Heinz Brisch, a psychiatrist at the Dr. von Hauner Children’s Hospital at the Ludwig Maximilian University of Munich. ‘In Johanna Haarer’s view, it is important to deny caring when a child asks for it. But each refusal means rejection,’ Grossmann explains. The only means of communication open to a newborn are facial expression and gestures, he adds. If no response is forthcoming, children learn that nothing they try to communicate means anything. Moreover, infants experience existential fear when they are alone and hungry and receive no comfort from their attachment figure. In the worst case, such experiences lead to a form of insecure attachment that makes it difficult to enter into relationships with other people in later life.” 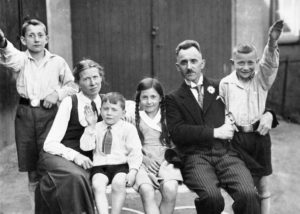