From Lown Institute: “On January 9th, 2019, the Lown Institute released the 2nd Annual Shkreli Awards, a list of the top ten worst actors in health care from the past year, named for the infamous ‘pharma bro’ Martin Shkreli.

Among the top ten this year:

‘It’s hard to ignore the epidemic of corruption and greed in health care when you see these stories all together,’ said Shannon Brownlee, Lown Institute Senior Vice President. ‘And these aren’t isolated incidents; they’re the natural result of a broken system.’

A panel of esteemed patient activists, clinicians, and health care journalists weighed in on the final ranking of Shkreli nominees to choose the winners. The full list of winners, along with comments from the judges, is available on the Lown Institute website.

‘As long as the drive for profit supplants the desire to heal, the promise of life, liberty, and happiness will be out of reach for many Americans,’ said Brownlee. ‘We hope these awards will not just shock or anger readers, but inspire them to action.'” 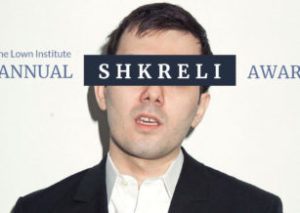