From NPR: “After the 2016 presidential election, teachers across the country reported they were seeing increased name-calling and bullying in their classrooms. Now, research shows that those stories—at least in one state—are confirmed by student surveys.

Francis Huang of the University of Missouri and Dewey Cornell of the University of Virginia used data from a school climate survey taken by over 150,000 students across Virginia. They looked at student responses to questions about bullying and teasing from 2015 and 2017. […]

Seventh- and eighth-graders in areas that favored Trump reported bullying rates in spring 2017 that were 18 percent higher than students living in areas that went for Clinton. They were also 9 percent more likely to report that kids at their schools were teased because of their race or ethnicity.

In the 2015 data, there were ‘no meaningful differences’ in those findings across communities, the researchers wrote. […]

‘Anybody that’s in the schools is picking up on this,’ [University of Florida psychology professor Dorothy Espelage] says. ‘You don’t have to be a psychologist or a sociologist to understand that if these conversations are happening on the TV and at the dinner table that these kids will take this perspective and they’re going to play out in the schools.’

A nationally representative survey conducted in the fall of 2017 showed that just 14 percent of 9- to 11-year-olds believe that the country’s leaders model how to treat others with kindness—and 70 percent said it would help kids their age to be kinder if adults in charge of the country set a better example.” 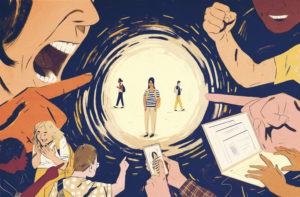