From Okayplayer: “Honest exploration of mental health has become a predominant theme in hip-hop. Artists like Kid Cudi and Saba have been praised for their strength in vulnerable albums like Kids See Ghosts and Care For Me, respectively. Those projects explore issues like survivor’s guilt, depression, and anxiety. These are issues millions of Americans are dealing with, making them the modern archetypes of a country more depressed than it’s been in centuries.

It’s not taboo to sing ‘Push me to the edge, all my friends are dead’ like Lil Uzi Vert did on ‘XO Tour Llif3.’ Or, say things like ‘I hate being bipolar. It’s awesome’ like Kanye West did on the cover of Ye. If modern artists are akin to famous visual artist Bob Ross — delicately laying their feelings on a canvas while subtly imploring society to draw along with them — then a project like The Notorious B.I.G.’s 1994 debut  Ready To Die is a paintball shotgun fired at that easel, warning everyone to get the hell out of the way.

On the album’s title track, he frustratingly belted, ‘fuck the world, fuck my moms and my girl. My life is played out like a Jheri curl, I’m ready to die!’ He talked about self-medicating and ‘livin’ every day like a hustle, another drug to juggle’ on ‘Everyday Struggle.’ The album’s final track, ‘Suicidal Thoughts,’ dealt with the grim self-loathing that manifested from a creeping suspicion that ‘death is calling’ and feeling ‘worthless’ in a community that ‘considered him the worst.’ In all his utterances that he was ready to die, it was clear he wasn’t just in his feelings.

So many successive mainstream rap albums took their cues from Biggie’s magnum opus, not just with the track-for-everyone format Puff Daddy orchestrated, but in Biggie’s frank explorations of his existential dread. Biggie chalked up the laments of ‘Suicidal Thoughts’ to weed in an interview. He, nevertheless, crafted a personal portrait of what pain looked like for a Black person trying to navigate the treacherous Brooklyn streets in the remnants of the Crack Era. The project singlehandedly negates the notion of ‘senseless violence,’ as he bluntly explains the factors that lead people toward the violent crimes better than any clinician could.” 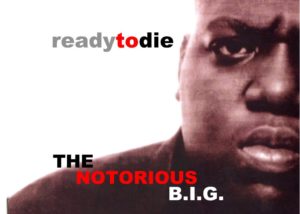