From The Sacramento Bee: “Nearly a dozen protestors said they were demanding the immediate closure of Guiding Hands School in El Dorado Hills. Those gathered also said they believed state regulators didn’t do enough to prevent the death of Max Benson, 13, who died Nov. 29, a day after school staff put him in a face-down restraint for an extended period of time.

The California Department of Education found ‘sufficient evidence’ in a preliminary inspection of Guiding Hands that the facility had violated multiple state rules governing how and when physical restraints can be used on students, according to a letter sent to the school obtained by The Sacramento Bee through a California Public Records Act request. […]

Protestors said that the actions by the school staff are not isolated incidents, and physical restraints are used often.

‘Archaic methods of behavior intervention, excessive force and prolonged physical restraint all contributed to, if not caused, the death of this young boy,’ said Jordan Lindsey, executive director of The Arc California, an organization which serves people with disabilities. […]

‘This school should have been shut down years ago,’ Kaufman said. ‘They should have listened, and not have waited until someone died. It was a matter of time.'” 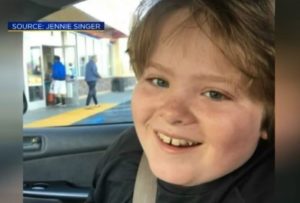