From BuzzFeed News: “As Bly’s anecdotes, and my own, indicate, a primary feature of the experience of staying in a psychiatric hospital is that you will not be believed about anything. A corollary to this feature: Things will be believed about you that are not at all true.

My third hospitalization occurred in rural Louisiana. I told the doctor that I was a writer and had studied psychology at Yale and Stanford, which was about as believable as my saying that I was an astronaut and an identical twin born to a Russian ambassador. I later trounced the other patients in a mandatory group therapy word game, not allowing anyone else to score a point; to do so was childish, but I was tired of being treated as though I were stupid. I do not know how my behavior in this session reflected on me from the nurses’ and doctor’s perspectives. It may have indicated that I was intelligent, or at least book-smart, two characteristics that are of dubious value in a psychiatric hospital. It almost certainly indicated that I can be a stubborn asshole.

The doctor told me in one of our rare meetings that I’d said, upon emergency room intake, that I believed in ‘a conspiracy of people’ who were determined to hurt me.

‘I didn’t say that,’ I said. ‘I said that I was feeling unsafe.’ But ‘feeling unsafe’— as in, feeling terror about everything and nothing in particular — was an unfortunate phrase for me to use during the intake. ‘Unsafe’ is a psychiatric code word for ‘suicidal,’ which I was not, although I was many other things. I hadn’t said anything about a conspiracy. ‘Unsafe’ might have triggered the hospital’s belief — its own delusion — that I felt unsafe due to a paranoid belief: a conspiracy of people out to do me harm.

The hospital maintained for the remainder of my stay that I had come in feeling ‘unsafe,’ with delusions of persecution. Because ‘unsafe’ doubled as ‘suicidal,’ I was considered a danger to myself. Even though I had voluntarily walked into the ER for help, ‘unsafe’ meant that I was considered to be ‘involuntarily hospitalized,’ which also meant that I was locked down in the rural Louisianan hospital, on the north shore of Lake Pontchartrain, until the doctor gave me permission to leave. I did not know how long that would be.” 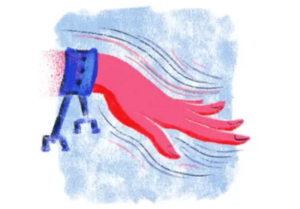