From U.S. News & World Report: “Population health analysts, academics and on-the-ground specialists say heroin and its related plagues of crime and death have stalked African-American neighborhoods for decades, garnering little to no attention. And when the government has bothered to address it in cities like Chicago, critics say, it’s usually through police crackdowns on users and dealers rather than increased access to intervention, drug treatment or badly needed economic aid.

The disparities in attention, resources and long-term strategies have led to a tale of two opioid crises. One is white, a malady of medical and mental health, and worthy of a White House-level task force. The other is black, criminal and largely ignored, even as statistics show black opioid users are dying at a skyrocketing pace. […]

When violent unrest swept through American cities after King’s assassination in 1968, Chicago was among the hardest hit. Once the smoke cleared, demolition and disinvestment trumped reinvestment and reconstruction. West Side factories relocated to Dixie, burned-out homes were razed and never rebuilt, and drugs – including heroin – flowed in along with crime and decay. As long as the users were black, Kane-Willis says, the city preferred punishment to rehabilitation. […]

Ultimately, the group at Haymarket Center concludes, an ideal plan to break heroin’s grip on the West Side of Chicago would involve a broad combination of initiatives, ranging from harm reduction to sustained investments in schools, housing and quality job-training programs, addressing the factors that cause drug use to proliferate. None of them expect that kind of help to arrive any time soon. […]

‘The way this shit is so set up, it makes us look like we’re at fault for these circumstances,’ [resident Daniel James] says, his rumbling baritone voice breaking, a tear spilling down his cheek. ‘I have a community that’s already suffering.’

Insisting that community just say no to an illegal drug that can ease the suffering, James says, ‘is like telling a chicken, “Well, just fly.”‘” 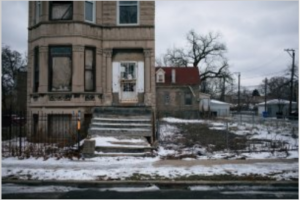