From City Limits: “In 2017 there were over 600 certified peer specialists in New York City alone, according to the Peer Workforce Consortium. That number has grown since the launch of ThriveNYC in 2015, Mayor de Blasio and First Lady McCray’s effort to overhaul the city’s mental health infrastructure, when the city pledged to train 200 certified peer specialists yearly beginning in fiscal year 2017.

Yet these gains have not tracked with acceptance of peers as equal partners in treatment. Stephanie Thompson, who became a certified peer specialist in 2015, says that one of her former employers—a prominent local social service agency—hosted monthly staff parties to which the peers were not invited, and that her clinical colleagues persisted in treating her like a client. ‘That type of stuff is institutional, and it’s what I ran up against, and it’s one of the reasons I’m not working in those agencies doing what I love to do,’ says Thompson. […]

As part of his role as a trainer for the Psychiatric Institute, [organizer Sascha Altman] DuBrul interviewed many peer specialists working within New York City and found that these problems—as well as low pay, a dearth of career advancement options and opportunities for training—were widespread. […]

The current state of affairs is a far cry from the intended purpose of peers, which was as a corrective for the chauvinism of clinicians ignorant of the ways systemic factors compound psychiatric distress. ‘How do we make sure that there’s peer roles that actually can have enough power and weight to them that there’s the ability to be transformative, the ability to actually change the model from the inside?’ asks DuBrul. ‘What that would look like is if people organized.'” 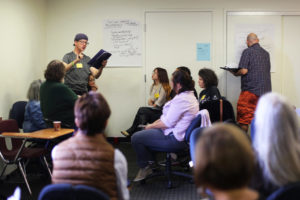