The project group that developed the Power Threat Meaning Framework (PTMF) responds to critiques and unapologetically stands by their original vision as they offer reflections, clarifications, and suggestions for future development.

The development of a conceptual alternative to current diagnostic systems in psychiatry is an ambitious goal. Yet, this is exactly what a team of senior psychologists in the British Psychology Society (BPS) and service-users sought out to do when they launched the Power Threat Meaning Framework (PTMF) just over one year ago. The main conceptual difference between the PTMF and dominant diagnostic systems is the view that individuals’ distress is situated within their interpersonal and social contexts rather than biomedical states. They write:

“Our argument – which applies to formulations as well as narratives in a more general sense – is that there is a crucial difference between a system based on diagnosis, and one based on the assumption that people’s experiences and expressions of distress arise out of reasons, functions and meanings, all of which are deeply rooted in their relational and social environments.” 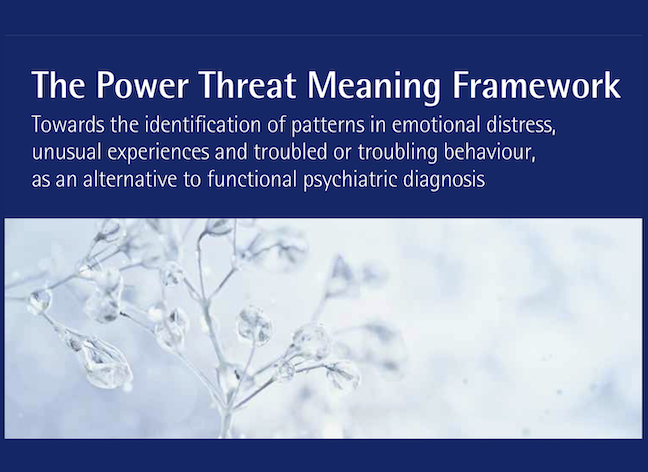 In a new article, the team, led by Lucy Johnstone and Mary Boyle, comments on the responses to PTMF, including its widespread positive reception as well as the critique. An additional feature that sets the PTMF apart from traditional systems is that it was developed alongside service users. This co-production included service users as core team members and project consultants. The team’s perspectives were published in a recent special issue compiled by the Clinical Psychology Forum.

The PTMF has received significant attention. One year following publication, it’s been translated into several languages and has sparked extensive interest and debate across the globe and on social media forums.

“A dozen blogs on the PTMF appeared in the first fortnight, and even in the relatively short time since publication, there are various examples of translating it into practice across a range of different fields, as illustrated in this issue.”

Johnstone and team clarify the purpose of PTMF and stand by their original statements in the face of critique. For example, they respond to criticisms about this sentence in particular, that was featured in the original 2018 publication: “…it can no longer be considered professionally, scientifically or ethically justifiable to present psychiatric diagnoses as if they were valid statements about people and their difficulties” (Johnstone & Boyle, 2018, p. 85).

They write that although this sentence has received a contentious response, they stand by their statement that psychiatric diagnoses cannot be considered valid. They reference Allen Frances and others, who have been involved in the development of current, prevailing diagnostic systems, and have ultimately come out to say that they cannot endorse them as scientifically sound. The team highlights the right for people to know about the dangers and shortcomings of diagnostic paradigms, recognizing that it may be an uncomfortable confrontation. However, they express disinterest in “policing” individuals’ language, and support the right of each person to use whatever terminology they believe best fits their experience.

They go on to address other critiques intended to discount the PTMF for its radicality:

“More subtly dismissive are claims that the framework is ‘sociopolitical’ ‘extremist’ and ‘polemical’. We make no apology for producing a framework which is sociopolitical in the sense that it situates people’s distress firmly in that context and links directly to ideas about social justice and community and social action.”

Further, Johnstone and team write that the PTMF “does offer a critique in a very controversial area, which frequently invites the term ‘polemical’. But it is not unevidenced– although it does question the narrow definitions of ‘evidence’; the separation of fact and value and the assumed neutrality of much mainstream psychology and psychiatry.”

As for the discussion of what counts as “evidence,” Johnstone and team go into this conversation in great detail. They outline the ways in which diagnostic systems are organized in biological and pathological understandings of mental health problems. This reliance on medical-type patterns strips away the possibility that problems have meaning in relation to one’s circumstances. They critique medical frameworks as operating from underlying positivist assumptions. Positivism views data collection and analysis as a neutral, straightforward process that objectively unveils natural facts about the world and people.

“It is exactly this view that the PTMF challenges,” they write, “it arises partly from psychology’s and psychiatry’s reluctance to acknowledge positivism as a philosophy rather than a set of self-evident rules for discovering facts about the world.”

Therefore, while some critics contend that an alternative system is not necessary, the PTMF team believes that the underlying philosophy and assumptions of diagnostic frameworks ought to be questioned and explored for the sake of not just ethics, but accuracy. They continue:

“Asking people to let go of the hope of finding medical-type patterns in distress organised by biology or ‘psychopathology’, and suggesting instead patterns organised by meaning, necessitates abandoning the false hope of finding discrete, universal causal pathways which are a precise fit for any individual, and which are stable across time and cultures. It means moving from clusters based on what people supposedly have or are, towards clusters based on what they do and experience in particular contexts. It means abandoning medical terms such as ‘symptoms’, ‘disorders’, ‘comorbidity’, ‘dual diagnosis’ and even ‘transdiagnostic’.”

In addition, the project group clarifies and responds to numerous questions. For example, some responses reflect the question: “Is the framework meant to replace all current practice?”

The team shares that they have attempted to describe what a conceptual alternative might look like. However, whether it is fit to operate and be implemented as a complete alternative is a decision that is out of their hands. Rather, this decision would be reached by stakeholders and those who dictate practices within particular settings. They respond that, in the short term, it is realistic to expect that the PTMF may be used alongside dominant frameworks or to encourage alternatives within current practices.

The team also responds to questions about whether the PTMF is meant to be trauma-focused. Although the framework is inclusive of considering the impact of experiences that may be described as “trauma,” the team holds reservations about the medicalization of this term. Trauma, through a medical lens, can be a misleading term that implies extreme, life-threatening events that are discrete. Alternatively, the PTMF is intended to also capture continuous negative experiences that are “embedded in people’s lives and relationships.”

The team goes on to address responses in nuanced ways. They express their wish to emphasize and address the role of professional power in influencing practice and mental health legislation, as well as its ideological influence in the production of “theory, research and cultural narratives of distress.” Moreover, they encourage discussion about the implications of rejecting diagnostic categories. Recognizing that formal diagnoses can provide access to services, they validate the argument that “dropping diagnostic categories could be used to promote a neoliberal agenda of withdrawing support.” However, they also assert the following:

“. . . it is also true that diagnostic labels have not prevented the current dire situation in which welfare recipients have been driven to destitution and even suicide. For all these reasons, the PTMF aims to start an important and necessary discussion about ways in which the benefits system might start to move.”

Finally, in staying true to their vision that the PTMF can be step toward re-conceptualizing diagnosis to provide contextualized and socially just responses to distress, the team speaks to increasing involvement of service users and a diverse group of stakeholders in the framework’s future development. In addition to this, they highlight the production of accessible versions of the framework, the importance of continuing to validate its evidence base through research, and working to promote alternatives to diagnosis “in the area of benefits, the law, and other statutory agencies.”

Overall, the team comments that the PTMF is “a considerable conceptual leap, but we argue that it reflects and allows for the indefinite complexity of human agentic, meaning-based responses to their changing circumstances.” They conclude:

“While we have at no point claimed to have produced a ‘paradigm shift’, we do feel that widespread interest in PTMF is a sign that people are actively looking for alternatives.”