From Undark: “Chester Pierce — the founding president of the Black Psychiatrists of America — was most concerned about the pernicious influence of one institution in particular: television. By 1969, virtually every American family home had at least one set. As one commentator at the time observed: ‘American homes have more television sets than bathtubs, refrigerators or telephones; 95 percent of American homes have television sets.’

Small children of all ethnicities were growing up glued to TV screens. This worried Pierce, because he was not just a psychiatrist but also a professor of early childhood education. And from a public health standpoint, he believed, television was a prime ‘carrier’ of demeaning messages that undermined the mental health of vulnerable young black children in particular. In fact, it was Pierce who first coined the now widely used term microaggression, in the course of a study in the 1970s that exposed the persistent presence of stigmatizing representations of black people in television commercials.

It seemed to Pierce, though, that the same technology that risked creating another generation of psychically damaged black children could also be used as a radical therapeutic intervention. As he told his colleagues within the Black Psychiatrists of America in 1970: ‘Many of you know that for years I have been convinced that our ultimate enemies and deliverers are the education system and the mass media.’ ‘We must,’ he continued, ‘without theoretical squeamishness over correctness of our expertise, offer what fractions of truth we can to make education and mass media serve rather than to oppress the black people of this country.’

Knowing how Pierce saw the matter explains why, shortly after the founding of the Black Psychiatrists of America, he became personally involved in helping to design a new kind of television show targeted at preschool children.” 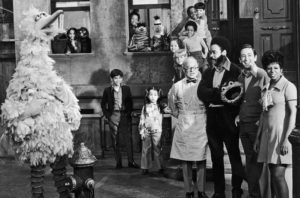