A recent special issue of the American Psychologist features the latest research and thinking on “racial trauma” or “racism-induced wounds.” An article, contributed by Dr. William Ming Liu from the University of Maryland and colleagues, explores the often-unmentioned effects of acculturation on people of color. The researchers argue that the way acculturation processes operate in the U.S is “suffused within dominant cultural values, connecting the array of cultural values into a coherent whole and bearing with it an explicit status for White people and people of color.” Liu and colleagues go on to propose recommendations for research and clinical practice that incorporate the connections between racism and acculturation to be able to create psychological healing.

“We contend that conceptualizing acculturation as a process related to White supremacist ideology allows psychologists to connect constructs like internalized racialism, acculturation and distress, and microaggressions as constant features for people of color,” the authors write. “Recognizing these interrelationships will enable psychologists to further refine research and scholarship as well as clinical approaches for communities of color and, in so doing, move toward a more just world.”

The authors argue that acculturation behaviors require people of color to “perpetually be aware of cultural norms and expectations and, of importance to subscribe to them in order to fit in and to ‘take care of’ White people’s feelings around race, ethnicity, and culture-all the while, people of color may be forfeiting their own psychological and emotional welfare, internalizing stereotypes and demeaning ideological systems, and experiencing poor health.” This can manifest in examples such as stepping out of the way on the sidewalk for a white person to pass or avoiding racial discussions such as the reoccurring police shootings of young black men in America.

Racial trauma is understood as “persistent exposure to racism or sudden racist encounters, experienced as painful, followed by symptoms such as intrusive thoughts, avoidance, anger, and depression.” In addition, microaggressions are described as “commonplace and frequent verbal, behavioral, and environmental slights.” The authors understand the effect of racism to be the “focus on accumulating and/or maintaining geography and territory (e.g., housing and school segregation) and perpetuating economic inequality regarding people of color.”

They argue that seeing acculturation only as a process of adopting dominant cultural values “overlooks the ideological underpinnings” and ignores “the asymmetric power relationships that propel this process for people of color.” They ask, “How might we reconceptualize acculturation experiences as shaped by racial trauma and microaggressions rather than acculturation as individual choices?” and “How might American psychologists more effectively address the source of racial trauma with respect to acculturation and work with clients to develop resiliency and to heal from these racism-induced wounds?”

The article underscores three main themes, (1) critique of current acculturation scholarship, (2) description of white cultural values, ideologies, and spaces, and (3) exploration of ways researchers might acknowledge white supremacist ideology in the context of acculturation. The authors explore the implications of this theoretical understanding for “more racially and culturally responsive scholarship and psychological practices.”

Liu points out that in much of the current acculturation research, “dominant white cultural values are not connected to white supremacy but left as neutral (i.e., nonracial) mainstream value and belief system.” Through using a passive voice as a researcher and using racially innocuous terms and references, e.g., the “larger society,” “native,” or “receiving culture,” racial hierarchies are often blurred. Likewise, using non-specific terms like “ethnocultural groups” or “immigrant” can “neutralize” the particular experiences of specific groups.

Implications for Psychology Research and Practice

Reconceptualizing acculturation to explore the impact of the ideological beliefs and behaviors to which people of color are expected to adapt is helpful to “understand that psychotherapy and their conceptualization of mental well-being are based on white masculine norms and white supremacist ideology.” The researchers lay out six steps for practitioners to employ a more holistic comprehension of racial trauma, microaggressions, and acculturation, including the support of white allies to help other white people conceptualize these themes, while maintaining awareness that white people may experience demoralization “related to the constant need to work on their own critical consciousness.”

Stepping outside of the Westernized value of individualism and progress, Liu and colleagues acknowledge the life-long, relational process of healing for persons of color in a white society:

“If the acculturation process and acculturation experiences via microaggressions and racial trauma are continuous, then so, too, are the healing processes and experiences for people of color. Indeed, healing is a personal and community effort that occurs throughout the life span.” 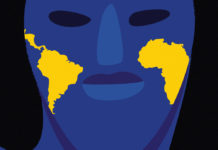