From the Council of Europe, Commissioner for Human Rights: “Addressing the Parliamentary Assembly’s debate on ‘Ending coercion in mental health: the need for a human rights-based approach’, the Commissioner delivered the following statement today:

‘. . . My experience as your Human Rights Commissioner has . . . confirmed . . . the vicious circles caused by a coercion-based mental health approach.

For example, I have seen first-hand how the lack of community-based, voluntary mental healthcare services result in even more coercion and deprivation of liberty. This causes tremendous suffering to the individuals concerned, at great cost to society.

I have seen how a coercion-based mental health system perpetuates the isolation of the very persons who need the support of their community the most, which in turn fuels more stigma and irrational fear.

I have seen how the supposed safeguards to protect persons with psychosocial disabilities from arbitrariness are reduced to mere formalities. This is because these safeguards function in a legal system where these persons do not even have a chance to have their voices heard. At their worst, such safeguards do little more than give a good conscience to those who are in fact taking part in human rights violations.

What coercion in mental health ultimately does is to silence and isolate those who are already suffering from mental illness. Crucially, it reduces our ability to listen and respond to their needs.

Historically, rejection and isolation has been our default response to persons with psychosocial disabilities. This ingrained fear is still very strong in us and is fuelling the prejudice that they are automatically a danger to themselves and to society, against all available statistical evidence to the contrary.

The Rapporteur points to the fact that there is not enough scientific evidence to prove the usefulness of coercion in reducing harm, whereas there is abundant evidence for the harm – and sometimes irreparable harm – that involuntary placement and treatment can cause for patients.

Evidence also suggests that recourse to coercion has often more to do with habit, a culture of confinement and the absence of alternatives, rather than therapeutic necessity . . .

It is our duty to encourage and support our member states to embark on a human rights-based transition of their mental health systems to reduce and end coercion, which is long overdue.'” 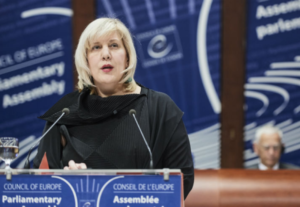