From The Appeal: “Instead of conducting a mental health screening or offering him treatment, detention officers allegedly pepper sprayed him, stripped him naked, and left him alone in a cell. Later, when they brought him to a shower, they surrounded him and beat him, according to a civil rights lawsuit filed in federal court last week. After that, the lawsuit claims, they hogtied him and shocked him with a stun gun. By the time he was brought to a hospital later the same night, he had been suffocated and had cardiac arrest. He was pronounced dead a day after his arrest . . .

The lawsuit alleges that Wayne County detention officers, under the direction of Sheriff Lawrence M. Pierce Jr., ignored Parker’s psychiatric issues. Instead, the officers responded to his anger by repeatedly pepper spraying him, kicking him, stomping on him, punching him, and shocking him.

At one point when Parker’s mental state worsened and he grew upset, they decided to ‘hog-tie’ him on his stomach by pulling his arms and legs behind his back and applying handcuffs, leg shackles, and a hobble restraint . . .

The complaint also names Southern Health Partners, the for-profit corporation that provides  medical and mental health services inside the Wayne County jail, one of more than 200 county and city correctional facilities it contracts with in 15 states. The corporation has been named in other lawsuits over inadequate treatment in jails and wrongful deaths, including a lawsuit filed last week in Putnam County, Tennessee, where it is being accused of ‘deliberate indifference to medical needs’ and the jail is accused of using excessive force . . .

Last year, 44 people died in North Carolina jails—more than any other year since the state began tracking jail deaths in 1997, according to the Raleigh News & Observer. Though a portion could be due to better reporting of deaths, experts also attributed the problem to an increased number of detainees with mental health and drug addiction issues.

Nearly 15 percent of men and 30 percent of women booked into jails have a serious mental health condition, according to NAMI, though many jails are poorly equipped to provide mental health treatment and instead respond to any erratic behavior with violence. In Virginia, for example, officers in the Fairfax County jail shackled 37-year-old Natasha McKenna, wrestled her, shocked her with a stun gun, and attempted to put her in a restraint chair. In response to the outcry over her brutal beating, which was caught on video, the county started a program to provide treatment to arrestees with mental illness who would otherwise be detained in a jail.” 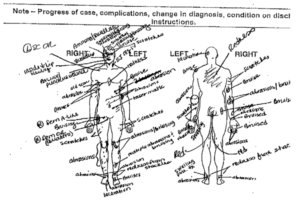