From Jacobin: “According to a study published in March, one-third of American seniors feel lonely. The same study found that nearly 30 percent of seniors reported they socialized with family, friends, or neighbors once a week or less. Senior isolation is correlated not just to a decline in mental wellbeing but also physical wellbeing, with another study concluding that ‘Lonely people are 50 percent more likely to die prematurely than those with healthy social connections.’

Senior loneliness is a public health issue, which means it’s a political problem. Bernie Sanders is treating it like one, and proposing a political solution: create a new office within the Administration for Community Living to address social isolation among seniors . . .

Addressing social isolation directly is only one part of Sanders’s plan for seniors. In the United States, 6.9 million seniors live in poverty and nine million experience food insecurity. ‘Since 2001,’ Sanders’s campaign says, ‘senior hunger has increased by 45 percent.’ Therefore Sanders proposes to expand Social Security, protect pensions, and quadruple the funding for the Older Americans Act, which provides home meals and other critical services.'” 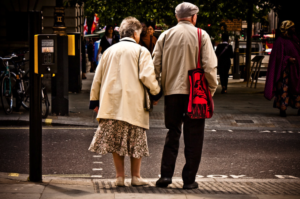