From Mother Jones: “As the opioid crisis sweeps the nation, it is taking a particularly devastating toll on children: The number of kids entering foster care because of parental drug use has more than doubled since 2000, according to new research in JAMA Pediatrics.

Researchers analyzed 5 million instances of children entering foster care between 2000 and 2017, as reported to the federal Adoption and Foster Care Analysis and Reporting System. While the total number of foster care entries has slowly dwindled over the years, entries specifically because of parental drug use jumped from roughly 40,000 in 2000 to nearly 100,000 in 2017. The rise was particularly dramatic among children who are white or Hispanic, those who live in the Midwest, and those who live outside of metro areas . . .I witnessed this trend firsthand when I traveled to Ashtabula County, Ohio in 2017 and shadowed county Children Services caseworker Kerri Mongonel. Her case load was full of children who had lost parents to addiction or overdose:


The scourge of addiction to painkillers, heroin, and fentanyl sweeping the country has produced a flood of bewildered children who, having lost their parents to drug use or overdose, are now living with foster families or relatives. In Ashtabula County, in Ohio’s northeast corner, the number of children in court custody quadrupled from 69 in 2014 to 279 last year. ‘I can’t remember the last time I removed a kid and it didn’t have to do with drugs,’ says Mongenel, a quick-witted redhead. Her clients range from preschoolers who know to call 911 when a parent overdoses to steely teenagers who cook and clean while Mom and Dad spend all day in the bathroom. Often, the kids marvel at how quickly everything changed—how a loving mom could transform, as one teenager put it, into a ‘zombie.'” 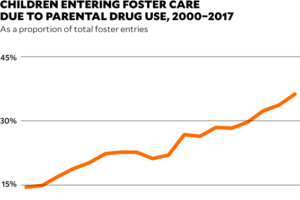