From the Chicago Tribune: “In Illinois, it’s legal for school employees to seclude students in a separate space — to put them in ‘isolated timeout’ — if the students pose a safety threat to themselves or others. Yet every school day, workers isolate children for reasons that violate the law, an investigation by the Chicago Tribune and ProPublica Illinois has found.

Children were sent to isolation after refusing to do classwork, for swearing, for spilling milk, for throwing Legos. School employees use isolated timeout for convenience, out of frustration or as punishment, sometimes referring to it as ‘serving time.’

‘Having a law that allows schools to do something that is so traumatic and dangerous to students without having some sort of meaningful oversight and monitoring is really, really troubling,’ said Zena Naiditch, founder and leader of Equip for Equality, a disabilities watchdog group that helped write Illinois’ rules in 1999.” 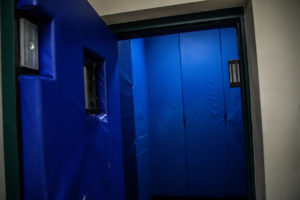