A new article in Lancet Neurology examines how Biogen’s experimental Alzheimer’s drug aducanumab was canceled amid two clinical trials, failing to show efficacy and causing a high rate of dangerous fluid retention in the brain.

However, some participants were still allowed to continue in the trials. After they completed, Biogen re-analyzed the data and found a slight statistical effect in favor of the drug in some post-hoc analyses in one of the trials. At a recent conference, Biogen suggested that the FDA should now use these failed trials as examples of successful trials and approve their drug.

“Biogen frame their analyses as showing one positive trial and a second, negative trial in which a subset comparison is offered as supportive of the positive trial. They do this because the FDA might accept such a result as meeting its regulatory criteria for ‘substantial evidence of effectiveness,’ which is defined as ‘one adequate and well-controlled study and additional confirmatory evidence.’ A conundrum for Biogen, however, is whether the EMERGE trial is, in fact, positive and well-controlled.”

In early experiments, the drug was able to consistently reduce amyloid plaques, a type of protein buildup in the brain that has been correlated with Alzheimer’s disease. However, the clinical impact of the drug was questionable, even in these early trials. Out of the 16 measures that Biogen used to assess improvement, only three scales showed even a slight improvement in Alzheimer’s disease symptoms or functioning. But these statistics weren’t adjusted for multiple comparisons. This is a statistical trick which increases the likelihood of finding a positive result just by chance.

A large number of patients also dropped out of these trials after experiencing dangerous fluid retention in the brain. Most of the people who experienced it had the APOE ε4 gene, which is the gene most often correlated with Alzheimer’s disease. According to Schneider, about 40% of those with the gene experienced this adverse event, although only about half of them dropped out of these early studies.

In 2015, Biogen began two large clinical trials of the type required for FDA approval, comparing aducanumab to placebo for the treatment of Alzheimer’s disease. They initially planned to include 1350 participants in each trial. After two years, Biogen increased the sample size to 1650 participants in each trial—according to Schneider, this was probably done to increase the likelihood of finding an effect. The more participants are included, the higher the likelihood that a tiny difference will be statistically significant. By 2019, though, the trials were failing to demonstrate efficacy, and they were canceled (through what is known as a “futility analysis”).

Nonetheless, some participants continued and finished the trial. Biogen then re-analyzed this data to try to find any salvageable results. One of the experiments still showed no improvement—in fact, there was a trend for worsening compared to placebo. However, with this new data, the other trial showed a statistical improvement over placebo. Biogen touted their number—the drug appeared 23% better than the placebo.

However, that number corresponds to a less than 0.5-point difference on the 18-point Clinical Dementia Rating Scale. That tiny difference is not likely to be clinically significant. And, according to Schneider, it could just as easily be due to a slight worsening in the placebo group as to an improvement in the aducanumab group.

Schneider takes issue with the statistical effects used to conclude that the trial was successful. “Because these were post hoc, subset analyses with smaller than planned samples (40% of participants did not complete EMERGE), treatment effects are likely exaggerated.”

Fluid retention in the brain was also still a problem: about 35% of the participants experienced this adverse event. And this could have caused issues with the assessment of results, according to Schneider. If a large proportion of the participants and researchers figured out that they were receiving the drug rather than a placebo, this could have “unblinded” the trial and biased the findings in favor of the drug.

Schneider writes that rather than trying to strong-arm the FDA into approving their drug, Biogen needs to provide the full data from the trials, including how the futility analyses concluded that the trials had failed, and thoroughly explain how a few extra participants could have changed the results into something positive. 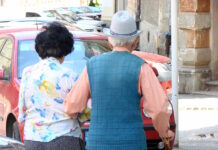 Antidepressant Use May Increase Risk of Hip Fractures in Older Adults

My Father-in-law on Risperdal — A Case Study Gets Personal