From The New York Times: “On the witness stand was James E. Mitchell, a psychologist and architect of the Bush-era interrogation program that had inflicted torture on prisoners held in secret C.I.A. prisons after the Sept. 11, 2001, attacks.

Defiantly, he described how the program came about and why in his view it was necessary, growing emotional only when recounting how he came to the conclusion that it was his patriotic duty to personally implement the techniques he had devised.

Sitting yards from him in the military courtroom built specifically for their death-penalty trial were the five men accused of helping plot the attacks. All of them had been subject to the methods developed by Dr. Mitchell. Their alleged leader, Khalid Shaikh Mohammed, was waterboarded 183 times in March 2003 by a team including Dr. Mitchell …

Dr. Mitchell, a former contract psychologist for the C.I.A., expressed no regrets or contrition, tearfully saying he did it for the American people at a time when President George W. Bush’s administration feared a follow-on attack by airplane or nuclear bomb to the Sept. 11 hijackings that killed 2,976 people. 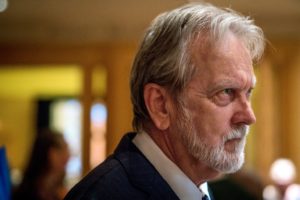