From Kindred: “I’ve been reading Jerome Bernstein’s landmark work, Living in the Borderland: The evolution of consciousness and the challenge of healing trauma. It has never been more relevant than today.

He makes these main points.

(2) Prior to the development of the western ego, the pervasive worldview was ‘indigenous,’ the perception of a world filled with perceiving, intelligent persons, some of whom are human; an experiencing of overlapping being, of inseparability, of connectedness (Narvaez et al., 2019)…

(4) Although all sorts of technological advancements have been the result of western culture, the ego has become overspecialized and like all overspecialized species, it will go extinct barring transformation…

(5) Transformation is occurring and clients experiencing the ‘Borderland’ are the indicators.

Bernstein defines the Borderland as: ‘The psychic space where the hyper-developed and overly rational western ego is in the process of reconnecting with its split-off roots in nature.'” 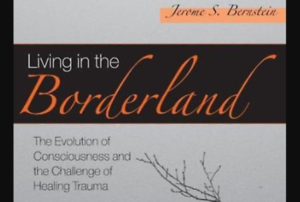