From ProPublica: “House Democrats are expanding their investigation of outside influence at the U.S. Department of Veterans Affairs, examining whether a push to use a new antidepressant from Johnson & Johnson was advanced by a group of unofficial advisers who convened at Mar-a-Lago, President Donald Trump’s private club.

The chairmen of the House veterans affairs and oversight committees sent letters last week asking for emails and financial records from the three advisers, Marvel Entertainment chairman Ike Perlmutter, physician Bruce Moskowitz and lawyer Marc Sherman. The Democrats are seeking, among other documents, any communications the men had with Johnson & Johnson and financial records showing whether they had any stake in the company.

As revealed by ProPublica in 2018, Trump gave the three men sweeping influence over the VA despite their lack of any relevant experience, such as having served in the U.S. military or government. VA officials called the trio the ‘Mar-a-Lago Crowd’ because they met at the president’s getaway in Palm Beach, Florida …

‘For any other drug they would have said, “Oh, this doesn’t meet our criteria and we’re not going to approve it,” but they bent over backwards for this one,’ Turner, who served on the FDA panel that reviewed Spravato but missed the session where the drug was discussed, said in an interview. ‘There’s risk that clinicians might say, “The FDA approved it, it must work” and leave it at that. It’s not that simple.’

In one of the trials, six people taking the drug died, including three by suicide. One of them, a 41-year-old man, drove his motorcycle into a tree 26 hours after taking the drug, according to the transcript of the FDA’s hearing on the drug. There were no deaths among the patients taking a placebo.” 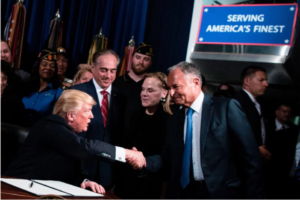