From The Washington Post: “So important is social connection to humans that the lack of it is terrible for our health. America already has high levels of loneliness, considered a public health hazard in itself even before coronavirus isolated us further. Scientists distinguish solitude from loneliness: Lonely people are hungry for connection but have too little. And a wide body of research has found lonely people are at higher risk for a host of illnesses, including heart disease, cancer and Alzheimer’s.

Cole has studied why, and he has found some history in our genes. Because humans are so social, viruses — like the one that causes covid-19 — love us. Viruses spread best through close personal contact, whether that’s in a colony of bats or a dorm full of freshmen. In an evolutionary arms race, that’s caused us to build up robust antiviral defenses in our immune systems. As Cole puts it, we lean on our antiviral leg.

Feeling socially isolated, though, triggers a fight-or-flight response, just as it would have in our ancestors, for whom being alone could mean being a saber-toothed tiger’s lunch. This revs up inflammation, an immune system response suited to fighting bacterial infection — a likely outcome of being wounded, Cole said. The body pivots, he said, to its antibacterial leg.

In ancient humans, this response would have been fleeting. But the stress of modern times, Cole said, leaves many people feeling ‘chronically insecure,’ keeping the response at a simmer. So does loneliness, which some researchers characterize as an epidemic. And inflammation, it turns out, fertilizes chronic diseases while also leaving us more vulnerable to viruses.” 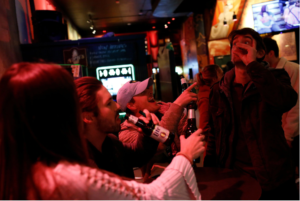