From ProPublica: “Across the country, child welfare officials have sent thousands of foster children to mental health institutions in distant states, including facilities where children reported being beaten and sexually assaulted by other residents or mistreated by workers.

The journeys of these children resemble an airline flight map: California to Virginia, Florida to Utah, Hawaii to Arkansas. Illinois officials have transported children as young as 7 to facilities in more than a dozen states.

One Chicago girl who was placed at institutions in Arkansas, Michigan, Ohio and Tennessee said she was sedated, subjected to bruising restraints and sexually assaulted by a facility employee, according to government records and interviews.

‘I basically felt like I was abandoned, like nobody wants to deal with me,’ said the girl, who is now 17.

Illinois officials also sent a 16-year-old boy to a facility in Indiana where police have been called to investigate dozens of battery allegations, including attacks that left children with broken bones or in need of hospital care.

‘When I first got there, I got jumped every day by kids and staff,’ said the boy, now 18.

Oregon officials placed a 9-year-old girl in an institution in Montana and didn’t visit her again for nearly six months, when they found her unwashed in an oversized hospital shirt, interviews and records show.

‘It’s not right they send us so far from home,’ the girl, now 10, said in a telephone interview.

Officials in Illinois and other states acknowledge they sent wards out of state to private facilities despite having a limited capacity to monitor the children’s care and safety. A Chicago Tribune-ProPublica Illinois investigation found repeated breakdowns in oversight as states — those sending the children as well as those receiving them — failed to protect young people in need of specialized care.” 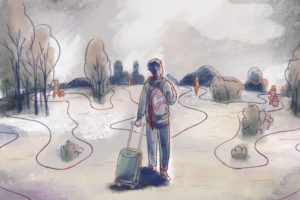