New research suggests that for young people with unusual experiences and beliefs such as hearing voices and paranoia, the quality of the therapeutic relationship is particularly important for producing a positive clinical outcome.

A variety of factors make these youth especially vulnerable to threats to their sense of agency in the clinical encounter. Acknowledging and mitigating these threats is essential to developing a quality therapeutic relationship and maintaining the young person’s sense of epistemic agency – that is, the sense that they can competently produce and share knowledge.

The article was written by philosophers of psychology, Joseph W. Houlders, Lisa Bortolotti, and Matthew Richard Broome from the University of Birmingham. They write:

“Our suggestion is that empirical evidence about encounters between clinicians and young people with unusual experiences and beliefs should be gathered and analyzed on the background of the risks we have identified. It is hoped that such information can provide the basis for training clinicians in leading mutually satisfying conversations with users, where the users’ interests and needs are acknowledged, and the users’ status as epistemic agents is not implicitly or explicitly undermined. We believe this may increase mutual trust as well as protect users’ sense of self.”

The diagnosis of mental disorders has been on the rise for youth since around 2010. For youth experiencing mental and emotional distress, taking an active role in their own mental healthcare decisions tends to produce better outcomes.

The clinical encounter, however, also has the potential to perpetuate oppressive systems. Psychiatric diagnosis, for example, can precipitate epistemic injustice in the therapeutic relationship, as when the clinician deflates the level of credibility given to the patient. Because the quality of the therapeutic relationship overwhelmingly determines patient perceptions of recovery for people of any age, it is important to attend to risk factors that can damage this relationship.

Young people with unusual experiences and beliefs are especially vulnerable to epistemic injustice. First, youth identity is still fluid and is thus more likely to be shaped by social interactions marked by power imbalances, such as the one that exists in the therapeutic relationship. Further, as the authors observe:

Forms of epistemic injustice are especially harmful to a young person’s sense of agency within the context of the clinical encounter, which, as noted, presents an asymmetrical power relation.

As the authors define it, a young person’s sense of agency refers to the sense that one can intervene in one’s physical and social environment and shape one’s life to some extent. Epistemic agency specifically refers to the sense that a person has the capacity to produce and share knowledge competently and authoritatively. It is precisely this sense of agency that is often eroded for youth who hear voices or have paranoid beliefs.

While young people and people with mental health challenges are typically considered to have less credibility and responsibility, the association between mental illness, youth, and insanity has been challenged in recent work. The authors explain:

“Rationality comes in degrees and local failures of rationality – which are confined neither to young people nor to people who have unusual experiences and beliefs – may not have implications for overall judgments of rationality.”

In other words, automatically judging a young person with unusual experiences and beliefs to be ‘insane’ or irrational unjustly undermines their sense of epistemic agency. However, in the mental health context, unusual experiences and beliefs can lead a person to be silenced, dismissed, or denied agency. These responses may be even more pronounced if the person experiencing paranoia or hearing voices is young.

It is crucial, then, for the clinician to recognize these risks in the therapeutic context and endeavor to engage positively with young people experiencing mental health challenges in ways that respect and not erode their epistemic agency.

To avoid inflicting the pervasive and durable effects of epistemic injustice on vulnerable young people, clinicians can work to enhance youth agency through, for example, co-constructed self-narratives. Young people with paranoia and unusual experiences are already stigmatized, and because they are still in the process of identity development, they are especially vulnerable to the effects of other people’s attitudes.

Within this framework of risk management, more research on therapeutic encounters with young people is needed to provide a basis for training clinicians in leading mutually satisfying conversations that increase trust and protect users’ sense of self. 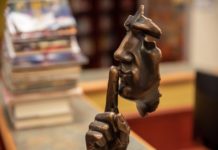 How Unexamined Assumptions in Western Science Lead to Epistemological Violence