A recent qualitative study from the journal Medical Anthropology Quarterly explores the person-specific social and cultural histories of Native American patients who have been given a diabetes-related diagnosis. The authors, led by Dr. Carolyn Smith-Morris of Southern Methodist University in collaboration with Native American clinical staff, found that extant colonial influences, such as the Relocation Act, were hidden within memories of lessons learned about diabetes in family contexts.

The results provide further need to move away from victim-blaming rhetoric and re-configure diabetes diagnosis in ways that attend to larger historical and structural factors that play a role in developing the disease. The authors argue for decolonizing health care practices:

“In this article, we demonstrate, through research among Native Americans in an urban setting, how even recent colonizing policies not only influence Native American health but shape Native Americans’ perceptions of their own marginalization. We make an argument for why distinctive histories of displacement, culture loss, and isolation necessitate a decolonization priority for medical anthropology.” 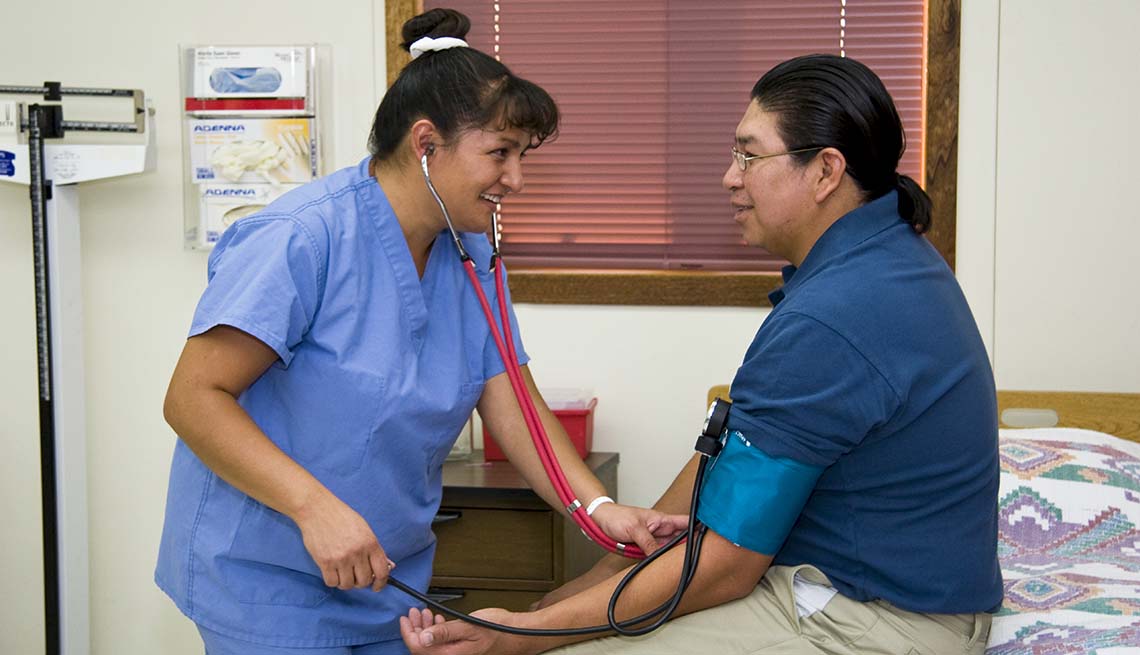 The pursuit of decolonized health care attempts to reframe clinical tropes of cultural competency by utilizing a framework that interrogates the historical and structural roots of patient perceptions and experience of illness. This movement seeks to address the disease through holistic treatment while also addressing the inequities that contributed to the disease in the first place.

This concept stemmed from a response to the cultural competency movement that recognized how brief training and uncritical, nonreflexive diversity efforts failed to improve the quality of health care for the patient.

Given the scrutiny of the cultural competency movement, the best models for decolonizing care have emerged from Indigenous communities themselves. This Indigenous expertise in decolonizing care is unsurprising, given Indigenous peoples both in the United States and globally have been victim to histories of colonization.

The colonization of North America by Europeans led to the slaughter, death by infectious disease, incarceration, and the enslavement of an estimated 7+million Native North American’s.

The health effects of colonization of Indigenous communities originated in the period of Columbus’s landing in 1492 to the late 1800s, when Indigenous communities were forced to become dependent on the federal government. The increased sedentism of reservation life, combined with the reliance on government commodities and processed foods, led to the rapid emergence of a metabolic disease epidemic.

Within medicine, diagnoses such as diabetes often entail providers using language that refers to patients “choices,” which render Native American’s vulnerable to these metabolic illnesses, when in fact, it was historical and behavioral factors, and a lack of choice, that led to this health epidemic to begin with. The authors explain how decolonizing care challenges this rhetoric:

“A decolonization analytic, in other words, does not blame individuals for health issues related to diet and behaviors but rather traces the historical, structural, and political roots of disease to population-level harms.”

The authors write about the historical and behavioral factors that have led to these health disparities, including the cost of food available on the reservation; limited access to transportation to hospitals and clinics; styles of communication between providers and patients; cultural values related to personal autonomy and advice-giving; cultural obligations of food sharing; local norms of body shape and thinness; cultural notions of authority that entails limited eye contact and not questioning directives.

Ultimately, attempts to live and maintain their Native American values and cultural ways of being clash with the dominant settler culture forced upon them, which have led to a complex set of predicaments for Native American health.

Continued clinical attention to biological or individual behavioral factors such as dietary and exercise choices persist, despite condemnation in medical anthropology. Lacking in the discourse is how histories of trauma are carried in bodily and emotional ways. Genetic and racialized explanations for diabetes risk efface evidence that this disease is produced by both colonial harms and contemporary structural determinants.

This complex history makes the act of diagnosis a process by which hegemonic medical paradigms reproduce the very structural disenfranchisement set in motion by colonialism. Extant literature on diabetes diagnoses has revealed that reception of the diagnosis depends not only on the patient’s cognitive and psychological characteristics but also on the patient/clinician relationship and broader “therapeutic landscape” such as beliefs, values, and sociostructural histories.

“Biomedicine’s diagnostic focus on the individual body and its designation of trauma as a psychological problem still promote siloed expertise and treatments that ignore larger structural and historical renderings of disease. Aspiring to decolonization—i.e., to acts that regenerate Indigenous knowledges, epistemologies, and ways of life calls for new ways of seeing and practicing diagnosis.”

The purpose of this study was to explore the patient-specific social and cultural histories of Native American’s who had a new diabetes-related diagnosis. The 15 participants were from an inter-tribal clinic that served over 20,000 Native American’s from ~90 different tribes whose families moved to the region following the Indian Relocation Act of 1956.

When asked what role participants’ families played in their understanding of and reaction to a new diabetes diagnosis, they found a variety of responses, including warnings from other family members that they better “get on it [their health]” and watch their sugar intake. Shared histories of diabetes were often a source of fear and worry, with stories of loved ones who had passed from the disease.

Additionally, the patient-blaming discourse common in the biomedical narratives became entangled in family discussions where there was victim-blaming between family members, leading to the further shame of disclosing diabetes diagnoses. These reactions were linked to the shame response from the engendered trauma that is the legacy of the Native American experience and is transmitted intergenerationally.

One participant recalled memories of her mother giving herself insulin shots before her passing from the illness and commented that “everyone on her side of the family is Indian, so they all had diabetes.” This narrative supported extant literature in which communities where diabetes prevalence has been so high for so long it is perceived as inevitable or unavoidable.

The researchers recognized within the participant’s narratives the potential for the family to camouflage or take the blame for political-economic harms that’s that led to diabetes. The authors write:

“Participants in this study did not speak of histories of disenfranchisement and colonization, but they did describe childhoods in poverty, isolation from Native American grandparents, and family members with diabetes. Recognizing that multigenerational poverty, reliance on cheap foods, and both physical and emotional isolation stem in part from Relocation Era policies, we suggest that these historical factors undergird narratives of family experience.”

The history of the Relocation Act of 1956 and the role of urban inter-tribal centers during postcolonial repair were central in understanding participants’ responses. Due to colonization fracturing tribal relations, leading to isolation from their communities, the Relocation Act of 1956 promised Native Americans transportation to major cities, job training and tools, and supplies such as clothing and household goods.

However, deceptive recruitment tactics and inadequate funding left many Native Americans stranded in cities without work or housing, and by 1968 more than 10,000 Native Americans were being relocated each year. The consequences of this deceit left members in isolation and living in new contexts of racial discrimination, segregation, and joblessness or low-paying wage labor with few opportunities for advancement.

Urban inter-tribal centers emerged in the late 19th and early 20th centuries in response to this, serving as a bridge for Native Americans seeking tribal connection as sites for political organization, community, and unity. The authors discuss the significance of this in modern times, explaining:

“Urban inter-tribal centers are therefore triage sites for those who want to reaffiliate with their Indigenous identities and communities. The colonial legacy distinctive to urban inter-tribal clinics, then, is the likelihood that their patients have experienced isolation from their tribal communities, the stigma and poverty of relocation to cities during the federal Relocation Era, and the weakening of communal and individual resilience associated with culture loss.”

With this in mind, the research here captured this unrecognized role of the urban inter-tribal centers in postcolonial repair work, demonstrating how illness provokes individuals to repair such historical ruptures and how a diabetes diagnosis both produces and reflects these harms. Participants who did not have access to Native American teachings or heritage as children often attributed this to their parents having moved away from tribal communities to seek opportunities in the “white man’s world.”

At inter-tribal clinics, patients must demonstrate their tribal enrollment to receive care. For some, seeking care was about reconnecting with ancestral roots, while for others, it was more about obtaining financial benefits and health care. The authors suggest the significance of this from one participant’s account, explaining:

“Time, distance, poverty, and discrimination have fostered intergenerational patterns of disconnection, tribal non-affiliation, and culture loss in today’s urban Indian community. Jeanette [participant pseudonym] and her mother’s family had been “trying for 40 years” to get their tribal affiliation cards without success. It was the urgency of her recent illness that spurred her to turn to a new family member, her sister-in-law, for help and to seek enrollment in her father’s tribe instead. Once enrolled, Jeanette got the health care she needed and began “learning” about her heritage.”

In this example and many others, urban inter-tribal centers serve as a local source of health care and cultural support. This finding is of particular importance because it reveals how clinical space can be used for decolonizing care when it embraces the idea that tribal membership can be deployed alongside access to care.

In closing, the body of work here shows that the history of long-term harm from the federal relocation policy remains. These harms lie silently under the narratives of individual behavior and family experience.

“We found that while a patient’s family is an important and common referent, family influences on response to a diabetes diagnosis were complex. The idea of “family” served in participants’ memories as a gateway for thinking about multigenerational poverty, reliance on (or valorization of) cheap foods, and both physical and emotional isolation. The conflation of these political-structural events as part of family influence is one way that colonial inequities continue to harm Native Americans.”

Overall, lessons learned in childhood about foodways, including foods of comfort and celebration, were influential in adults’ reaction to a diabetes diagnosis, as well as longstanding ideas about diabetes running in Native American families.

The authors suggest that diagnosis should account for the role of history in bodily experience. For patients whose illness perceptions are informed by inter-generational trauma, clinicians should uphold a duty to uncover and acknowledge this during clinical interviews to not further perpetuate these erasures that have taken place over time.