From Mother Jones: “Even if you’ve never heard of the [American Medical Association (AMA)], it affects your life. The organization helps determine the content of your doctors’ medical school training and the continuing education they receive, sets the ethical conventions that they are expected to abide by, helps decide hospital safety standards, and plays a key role in determining the cost of medical services. Its representatives advise the public on all manner of health issues, from police brutality to the Delta variant. With $430 million in annual revenues, the AMA advocates on behalf of its 272,000 doctor and medical school student members and nearly 200 affiliated medical societies. It publishes the prestigious Journal of the American Medical Association, one of the most widely circulated general medical journals in the world. The AMA Foundation, with some $25 million in assets, funds medical school scholarships and community health initiatives. And over the past two decades, the AMA has been the third-largest spender on political lobbying, topped only by the US Chamber of Commerce and the National Association of Realtors.

. . . But critics have long argued that the organization uses its white-coated prestige as a veneer to advocate on behalf of the medical industry—whose interests are, at times, diametrically opposed to those of the public’s health. This criticism predates the opioid crisis: A 1994 New England Journal of Medicine study found that the AMA’s political action committee gave far more money to politicians who opposed the AMA’s purported stances on things like gun control, tobacco cessation, and abortion than those who supported them. The organization has also repeatedly led the charge against progressive attempts to provide universal health care, even while making big profits off public health systems. ‘The AMA may accomplish things that help patients, but make no mistake, it is a doctor-first organization…Protection of the power, privilege, and the pocketbooks of physicians is the AMA’s compass,’ concluded journalists Howard Wolinsky and Tom Brune in their 1994 history of the association, The Serpent on the Staff.

. . . A look at the AMA’s track record over its nearly 175-year history shows that the opioid crisis is the latest development in a long history of dissonance between the organization’s mission and its actions.

. . . JAMA stopped running cigarette ads in the ’50s, but the AMA’s collaboration with the tobacco industry continued for decades. In 1964, after the surgeon general issued a landmark report concluding that smoking causes cancer, the Federal Trade Commission called for warning labels on cigarette packages—and ran into opposition from the AMA. ‘I’m really perplexed,’ wrote then–FTC Commissioner Everette MacIntyre. ‘Thousands of doctors and many individual medical societies favor the proposed warnings, but the AMA…[says] there is no further need for educational statements to the youth. This is precisely the position of the tobacco industry.’

. . . As the AMA was working to preserve its relationship with Big Tobacco, it was also laying the groundwork for a much more lucrative future, one that would reap profits from across the medical world—from private practice physicians to large hospital systems to the federal government.

The revenues were an outgrowth of one of the organization’s most long-held positions: opposition to national health insurance. Back in the 1930s, the AMA opposed all health insurance on the grounds that ‘no third party must be permitted to come between the patient and his physician in any medical relation.’ Later, in the 1960s, when liberals tried to establish Medicare, they faced a staunch opponent in the AMA, which warned of ‘socialized medicine.’ In the 1980s, when Congress tried to reign in spiraling Medicare costs, the AMA’s CEO warned that doctors ‘are really worried that they’re not going to be allowed to practice medicine as they know it…based on their own judgment.’ And while the AMA later supported the passage of the Affordable Care Act, today it continues to oppose a single-payer option.

. . . Based on how the AMA bills itself, as the unified voice of medicine, it’s reasonable to expect that the organization would play the role of medical arbiter, helping doctors and the industry more broadly navigate such complicated territory. ‘Most people, if they read in the paper that the AMA says this and that, they think, “Well, they must know.” The assumption is that they’re a neutral source with no interest,’ says Keith Humphreys, a professor of psychiatry and behavioral sciences at Stanford.

In reality, he concludes, ‘They’re a trade organization, but they’re not thought of that way.’

Therein lies the problem: While the AMA upholds the sacred doctor-patient relationship, its pharmaceutical funding and dependence on commercial revenue streams make it virtually impossible to discern where public health guidance ends and industry interests begin.

Over the past decade, the AMA has taken some steps to distance itself from opioid producers. ‘The medical profession’s understanding of opioids and the dangers associated with these drugs is different today than it was even a few years ago,’ explained the AMA Foundation’s Executive Director Barkley Payne in an email. Today, the courses on pain management are free of funding from pharmaceutical companies. Payne declined to share tax filings detailing how much money the foundation receives from various donors, but said that the foundation stopped taking money from opioid makers in 2018. A year later, Purdue Pharma declared bankruptcy.

It may seem, then, that opioids are finally going the way of tobacco. The decision to stop taking opioid money came exactly 40 years after the AMA’s tobacco study concluded that smoking did, indeed, cause cancer. In both cases, the organization eventually acknowledged the dangers of a product that public health advocates had been warning about for years. In both cases, one could argue that the pronouncements came too late, after the damage was already done.” 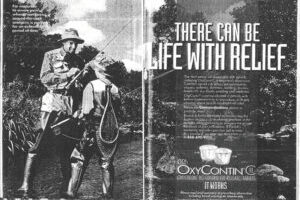