“Climate change is causing distress, anger and other negative emotions in children and young people worldwide, a survey of thousands of 16- to 25-year-olds has found. This ‘eco-anxiety’ has a negative impact on respondents’ daily lives, say the researchers who conducted the survey, and is partly caused by the feeling that governments aren’t doing enough to avoid a climate catastrophe.

‘This study provides arguments for anyone who has any connection to youth mental health — climate change is a real dimension into their mental-health problems,’ says Sarah Ray, who studies climate anxiety at Humboldt State University in Arcata, California.

The survey — the largest of its kind — asked 10,000 young people in 10 countries how they felt about climate change and government responses to it.

The results, released in a preprint on 14 September found that most respondents were concerned about climate change, with nearly 60% saying they felt ‘very worried’ or ‘extremely worried’. Many associated negative emotions with climate change — the most commonly chosen were ‘sad’, ‘afraid’, ‘anxious’, ‘angry’ and ‘powerless’ (see ‘Climate anxiety’). Overall, 45% of participants said their feelings about climate change impacted their daily lives.” 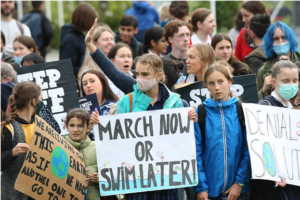