. . . In many cases, the individuals under guardianship cannot have a say in who serves as their guardian. Guardians often charge hefty fees, draining the assets they are supposed to protect. Most significantly, guardians can have full control over the lives of the individuals under their conservatorship, making decisions for their wards on medical care, family visits, and all other elements of daily living. If someone wants to end their conservatorship through court, conservators often prevent them from hiring a lawyer. Most conservatorships last until death.

Anti-guardianship activist Marian Kornicki, whose mother was subject to a guardianship held by third-party private lawyers, said that her family lost over a million dollars to court-appointed guardians who availed themselves of exorbitant fees.

‘Saying that you’re going to remove someone’s rights in order to protect them doesn’t make any sense,’ Kornicki said. ‘People need support, but you don’t remove their rights to do that.'” 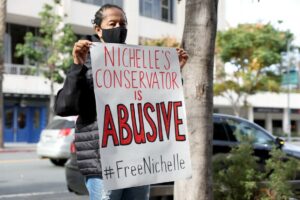