A new article, published in American Psychologist, issues a call to action for psychologists to engage in civil disobedience to fight social injustice in accordance with professional ethics. While acknowledging that individuals will be responsive to various and unique ethical considerations, it grounds the discussion around the APA’s Ethical Standards for Psychologists and Codes of Conduct (the Ethics Code) to provide a common context for psychologists.

The authors of the article, led by researcher Anthony W. P. Flynn of the Department of Counseling Psychology at the University of Wisconsin–Madison, take Ohio House Bill 658 (HB 658) as an exemplar of a law contradicting psychological ethics. HB 658 would have required psychologists to divulge if any child in their care questioned their gender identity or experienced dysphoria to the child’s parents. [This particular proposed legislation did not pass into law, but similar bills continue to be introduced across the U.S.]

The researchers ask readers to imagine how this sort of legal requirement would impact the relationships between psychologists and transgender youths from unsupportive families: 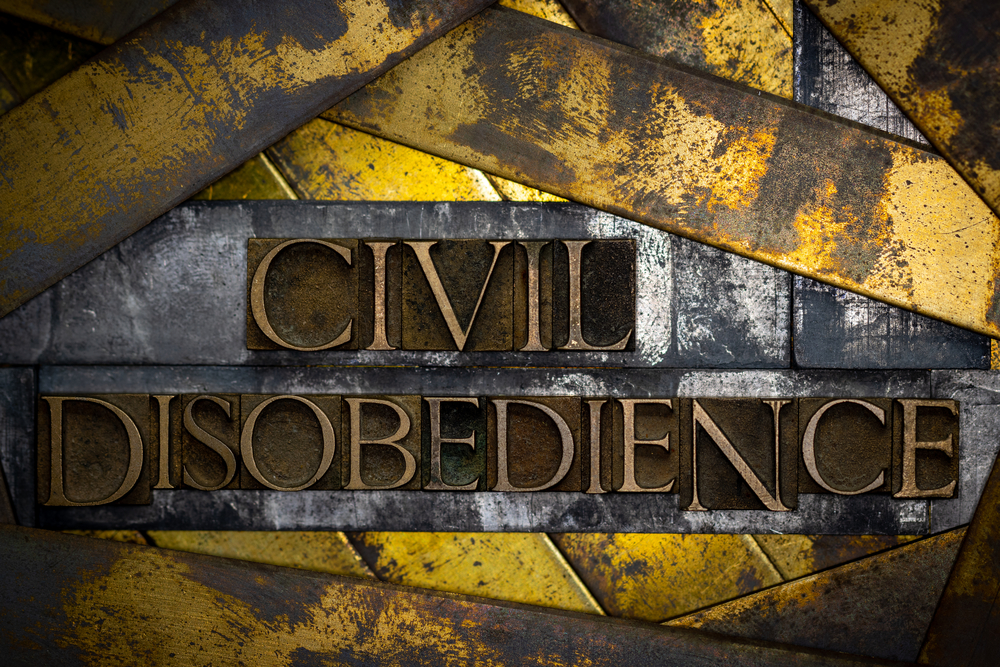 Before seeking to apply the APA Ethics Code to such considerations, the researchers briefly discuss the construction of civil disobedience, with a special focus on the ways various tactics are narrativized as acceptable while others are described as inappropriately violent. Considering the discourse around Black Lives Matter protests, for instance, the researchers write:

“These narratives often frame the occasional destruction of property by protesters (e.g., smashing windows, graffiti) as unjust violence, while excusing or justifying violent and disproportionate state repression against those who dare challenge the status quo (e.g., dousing protestors with pepper spray, shooting them with impact munitions, or worse) and overlooking the systemic violence that begets protest in the first place (e.g., the…police murders of Black people).”

On the opposite end of the political spectrum, the researchers note the rhetoric of civil disobedience is often appropriated by reactionary movements defending the status quo, which tend to be narrativized in more acceptable terms. They specifically identify armed abortion clinic protestors and COVID-19 anti-maskers as examples while listing the January 6, 2021 assault on the US Capitol as the most salient recent event; many of the insurrectionists defended their participation by calling it civil disobedience.

Having indicated the contested nature of the discourses around violence and civil disobedience, the researchers reorient their focus back to HB 658. They write:

“If the psychologist in our ethical dilemma were to protect a trans minor’s gender-related information, legislative proponents of HB 658 may deem that act as a violent affront to parents’ rights and ascribe victimhood to such parents. Further, if the psychologist were to protest HB 658 by damaging property (e.g., destroying records), such proponents may label that as violent. However, if a trans child were to experience harm under HB 658, such as a denial of services, exposure to conversion therapy and limits to their gender identity and expression, powerful lawmakers, media, and public consensus may not be so quick to label HB 658 as violent.”

“Such inconsistent and decontextualized perspectives on violence are built by and reinforce systems of exploitation and marginalization. In the case of HB 658, those systems include one where facilitating thoughtful decision-making and preserving personal authority is a commodity to be gatekept by health providers, rather than a human right. Civil disobedience that contests pathologization and dehumanization of trans identities can shift public consciousness to examine the inherent violence of limiting someone’s ability to make informed decisions while discovering, understanding, and creating gender; thereby, communicating a vision for change. That same civil disobedience simultaneously disrupts the commodification of informed decision-making and communicates to others that it is possible (and necessary) to continue disrupting. In addition to creating new ways to observe and contest social injustices, this act of civil disobedience contributes to the humanization of people who, within present systems, are otherwise dehumanized.”

Following these remarks about conflicting narratives in the construction of civil disobedience, the researchers proceed to investigate the APA’s Ethics Code for tenets potentially supporting practices of civil disobedience. The researchers first contextualize historical developments in the formulations of two particularly relevant Ethical Standards in the Code of Conduct: Conflicts Between Ethics and Law, Regulations, or Other Governing Legal Authority (Standard 1.02) and Conflicts Between Ethics and Organizational Demands (Standard 1.03).

Shortly after 9/11, these two were updated with language encouraging deference to laws and discouraging civil disobedience on ethical principles. The changes were contested by the APA’s Ethics Committee on multiple occasions; in 2008, Kenneth Pope, the chair of the committee at that time, withdrew from the APA in protest. A 2015 report found “that the Ethics Code failed to protect the public and permitted unethical conduct from psychologists, including participation in U.S. Department of Defense torture programs. This report and ensuing outcry in psychology beget revisions to standards 1.02 and 1.03 to their current reading.”

Standards 1.02 and 1.03 now demand psychologists facing conflicting considerations resolve them in ways consistent with the Ethics Code, as well as each specifically stating “under no circumstances may this standard be used to justify or defend violating human rights.” To return to HB 658, the researchers note demanding psychologists expose children’s gender dysphoria to their parents runs contrary to the formulations of human rights proposed in the Yogyakarta Principles plus 10.

Despite this change in formulation, the Ethical Standards fail to clarify “whether the locus of ethical responsibility and accountability belongs to individual psychologists or APA itself,” leaving indeterminate whether they might support either individual or collective civil disobedience. The researchers also caution readers to remember that “human rights are broadly contested, and structures intended to maintain human rights (e.g., international standards, treaties) are often constructed and selectively enforced to serve the interests of the powerful.” Due to these difficulties, they find the Standards, even in their current articulation, to be extremely limited in their potential to support civil disobedience.

Aside from the Ethical Standards, the APA’s Ethics Code also contains a set of General Principles; while not enforceable, they are still meant to be followed as ethical guidelines. Principle A (Beneficence and Nonmaleficence) demands psychologists facing conflicting obligations prioritize the minimization of harm. Similar to the notion of human rights, the researchers indicate the existence of multiple understandings of what constitutes harm within psychology.

Additionally, they write, “Harm manifests in nuanced ways across contexts. For example, ordinarily, it could be harmful to refer to your trans client using a pronoun (e.g., she, they, he, or ze) that does not correctly reflect their gender identity. However, in our ethical dilemma concerning HB 658, if the client’s hostile parents are present, using the client’s correct pronouns could effectively out them; thereby, exposing them to even greater harm.” Principle A, then, is extremely limited in its applicability to civil disobedience; the researchers instead emphasize the need for psychologists to maintain flexibility to handle changing contexts.

Principle B (Fidelity and Responsibility) requires psychologists to uphold professional standards publicly. The researchers note that Principle B “runs congruent with APA’s narrow definition of civil disobedience entailing open and public acts.” The researchers argue this construction can limit psychologists’ abilities to combat social injustice in practice. For instance, “Responding to HB 658, you cannot publicly refuse to disclose your client’s gender identity to their parents without undermining the client’s confidentiality or the effectiveness of your refusal. If you were to refuse to obey HB 658 publicly, there might be workplace repercussions that inhibit you from practicing; your advocacy for clients requires that you be able to have clients.”

Thus, the researchers argue Principle B can (and should) be interpreted to apply to a wider variety of practices than solely public acts. They support this position further with the statement for Principle C (Integrity), which affirms that, while truthfulness should be encouraged as a general rule, deception can be ethically acceptable, in cases where it will minimize harms—as would be the case with refusing to disclose a client’s gender identity to unaccepting parents.

Perhaps the clearest statements in the Ethics Code supporting civil disobedience come from the final two General Principles: D (Justice) and E (Respect for People’s Rights and Dignity). These two entail a recognition that all people deserve equitable access to psychological services, alongside an awareness of differences across individuals, including marginalizations and privileges; these together demand a certain level of support for civil disobedience, at least in response to discriminatory laws. Affirming this point, the researchers still conclude the Ethics Code, overall, is insufficient:

“Here, we echo criticism from representatives of the Ethnic Minority Psychological Associations that the Ethics Code fails to reflect the struggles, needs, cultural values, and sociopolitical histories of minoritized communities.”

Having found that the APA’s Ethics Code provides minimal support for civil disobedience, the researchers propose some of their own recommendations for psychologists. First, they suggest psychologists join in solidarity with existing social justice movements, listing numerous examples of those who have done so to great success. When engaging in collective acts of civil disobedience, they encourage reflecting upon individual identities and contexts, as well as “consider[ing] the ways that systems of power and oppression are maintained through institutions, influence each of us within those institutions, and in turn how we each contribute to structural processes of injustice.” They also write that “the beauty of structural analysis is that no single individual is held responsible for fixing an entire structural injustice; that responsibility is held collectively. Thus, we encourage psychologists to consider their personal (and psychology’s collective) responsibility to interrogate, contest, and disrupt structural injustice (e.g., ableism, classism, racism).”

The researchers also highlight a number of potential changes for the APA to make itself. One of these relates back to General Principle B (Fidelity and Responsibility), which they indicate could support a wider array of civil disobedience if reinterpreted. Currently, “APA asserts that the Ethics Code ‘applies’ only to psychologists’ ‘professional domain,’ including clinical practice, supervision, assessment, research, program evaluation, public service, and social intervention. Thus, it may initially appear that the Ethics Code can only empower civil disobedience birthed in what are traditionally considered psychologists’ workplace contexts, duties, and roles, such as refusing to engage in mandated reporting to protect client welfare or sharing access to paywalled research articles.” However, while their professional responsibilities are typically conceptualized in these ways, psychologists are embedded in webs of ethical relationships extending beyond these settings, out into their wider communities. Thought of this way, a principle demanding psychologists “uphold their professional obligations” may entail deeper duties to fight for social justice. The researchers thus recommend the APA “consider clarifying and perhaps winnowing artificial distinctions between professional and personal activity germane to civil disobedience.”

Finally, the researchers encourage the APA to promote education on civil disobedience as an extension of social justice training. They additionally call for material support in instances when the APA supports civil disobedience, like legal funds:

“When psychologists engage in transformative civil disobedience, it will be crucial for them to know that APA has their back… Among other things, APA could spearhead complementary policies to ensure that psychologists who disobey unjust laws do not lose their licenses to practice and urge malpractice insurers to cover necessary legal fees attendant to criminal and civil charges stemming from civil disobedience.”

Overall, the researchers of this new article found the APA’s existing Ethics Code has only a weak ability to support civil disobedience in the fight for social justice. However, recognizing the potential need for psychologists to engage in such conduct—like when bills similar to HB 658 are passed, they provide their own recommendations for best practices.