From Children’s Health Defense: “The American Academy of Pediatrics (AAP) this month added recommendations for preventive pediatric healthcare to its 2022 Periodicity Schedule, also known as Bright Futures — including the recommendation to ‘screen for depression and suicide risk’ annually in children starting at birth and up to 21 years.

With experts warning of a mental health crisis among children and adolescents, the AAP’s recommendation, at least on the surface, may seem sound and reasonable.

But depression screening can be dangerous, some experts say.

Dr. Allen Frances, professor and chairman emeritus of the Department of Psychiatry and Behavioral Sciences at Duke University School of Medicine, in 2016 told The Wall Street Journal that depression screening risks medicalization of the ‘normal’ and that ‘teens may be haunted for life by carelessly applied labels.’

Dr. Edmund Levin, who specializes in adolescent psychiatry, wrote in Adolescent Psychiatry, ‘Over-diagnosis needs to be considered as a contributor to the trend of increasing percentages of youth being diagnosed and medicated for a variety of mental health conditions, including depression.’

. . . could the AAP’s new recommendation result in many more children being prescribed lucrative and dangerous psychiatric drugs — some of which can cause suicide, especially in children, according to their own labels?

The AAP describes itself as ‘an organization of 67,000 primary care pediatricians, pediatric medical subspecialists and pediatric surgical specialists dedicated to the health, safety and well-being of infants, children, adolescents and young adults.’

Yet a quick look at its top donors reveals companies whose products may sometimes conflict with the ‘health, safety and well-being of infants, children, adolescents and young adults.’

The AAP is hardly the only well-respected medical association to play both sides of the street — taking drugmaker money while giving ‘trusted’ medical advice.

Nor is it the only association to establish detailed recommendations and screenings for patients — screenings that often directly enrich drugmakers.” 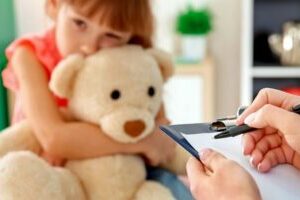