From CounterPunch: “Simple logic tells us that those atop a societal hierarchy will provide rewards for professionals—be they clergy or psychiatrists—who promote an ideology that maintains the status quo, and that the ruling class will do everything possible to manipulate the public to believe that the social-economic-political status quo is natural.

If a population believes that its financial and emotional suffering are caused not by social-economic-political variables but instead by individual defects—be it noncompliance with religious dogma or faulty biochemistry—this ‘individual-defect’ belief system can be a more powerful and less expensive way of maintaining the status quo than a heavily armed police force.

That organized religion has a great deal in common with organized psychiatry would be apparent to both Karl Marx (1818-1883) and Baruch Spinoza (1632-1677), two of history’s most famous critics of the political implications of organized religion.

Karl Marx, in A Contribution to the Critique of Hegel’s Philosophy of Right (1843), famously said: ‘Religion is the sigh of the oppressed creature, the heart of a heartless world, and the soul of soulless conditions. It is the opium of the people. The abolition of religion as the illusory happiness of the people is the demand for their real happiness. To call on them to give up their illusions about their condition is to call on them to give up a condition that requires illusions.’

Baruch Spinoza, in his Theological-Political Treatise (1670), somewhat less famously but perhaps more courageously given his era, said: ‘Granted, then, that the supreme mystery of despotism, its prop and stay, is to keep men in a state of deception, and with the specious title of religion to cloak the fear by which they must be held in check, so that they will fight for their servitude as if for salvation.’

Today, a handful of professors teach their students about Antonio Gramsci (1891-1937) and cultural hegemony, however, a century ago, the working class did not need scholars to explain to them how prevailing cultural beliefs are often social constructs implemented by the ruling class through favored institutions so as to maintain domination. Back then, workers immediately got IWW activist Joe Hill’s (1879-1915) song ‘The Preacher and the Slave’ (1911) about how preachers from the ‘starvation army’ attempt to get them to buy the lie: ‘Work and pray, live on hay. You’ll get pie in the sky when you die.’

If alive today, Hill may well write something along the lines of: ‘Alienate . . . Medicate. You’ll get pie in the sky with your SSRI.’

A generation ago, the political implications of biological individual-defect theories were obvious to many prominent scientists with a left perspective, for example, evolutionary geneticist R.C. Lewontin, neurobiologist Steven Rose, and psychologist Leon Kamin. In their 1984 book Not in Our Genes: Biology, Ideology, and Human Nature, Lewontin, Rose, and Kamin make clear the rightwing political ideology implicit in the individual defect theory of biochemical/genetic determinism: ‘Biological determinism (biologism) has been a powerful mode of explaining the observed inequalities of status, wealth, and power in contemporary industrial capitalist societies. . . . Biological determinism is a powerful and flexible form of “blaming the victim.”‘

Marx and Spinoza highly valued science, but it would be obvious to them that simply calling oneself scientific does not make one so.

Should psychiatry be seen as a science? Or should it be seen—no different than organized religion— as simply a belief system with its own social constructs that are promoted by the ruling class to convince people that their suffering is due to individual defects, rather than a defective social-economic-political system that results in alienation from one’s own humanity, from others, and from the rest of the natural world?” 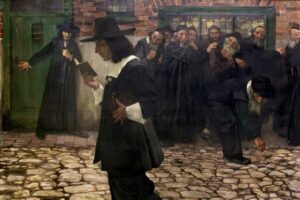