From The British Psychological Society: “Assistant Psychologist Fauzia Khan talks to Clinical Psychologist Dr. Lucy Johnstone about her journey as a psychologist. Lucy discusses her interest in formulation, trauma-informed practice and her contribution to the Power Threat Meaning Framework. She also addresses campaigns, conflict and critics.

You have a keen interest in formulation; what spurred this interest and how has it informed your work?

. . . I hope that as clinical psychologists, our whole approach is formulation-based. A formulation isn’t just something written up for the notes; it is our starting point when we first meet users of our services, our guide as we work with them, and the means through which we support them to make sense of their difficulties and find ways forward. Essentially, I see it as process of putting back what psychiatric diagnosis takes out: personal meaning, and a sense of empowerment and agency which, as many have testified, can be undermined if you are essentially seen as suffering a medical condition that arose out of the blue.

. . . Your work has heavily focused on trauma informed practice. Where does your motivation for this stem from, and how has it shaped your practice?

I was incredibly excited to be introduced to these ideas at a workshop run by survivors Jacqui Dillon and Eleanor Longden in 2010.  Anyone who has worked in front line services knows it is not a coincidence that the people who end up there very often have histories of severe trauma and abuse. The trauma-informed approach (TIA) shows us how this happens. It reframes ‘symptoms’ as ‘survival strategies’ and suggests ways in which we can start to heal our minds and our bodies . . .

And how has this work been received?

I have observed a strong backlash to these ideas as they gain more prominence. TIA is absolutely not about assuming, let alone insisting, that everyone in services has experienced a trauma of some kind, or that if they have, they must be pressurised to disclose or talk about it. In fact, as research shows, hardly anyone is even asked about abuse, let alone offered appropriate support with it. Judith Herman (1992/2001) had a lot to say about our need to deny the prevalence and emotional pain of trauma, and I think this goes some way towards explaining attempts to distort and discredit the approach.

We now have the research to justify what many clinicians have always known – that services need to be based not on ‘What is wrong with you?’ but ‘What has happened to you?’ The addition of this very large and well-established body of evidence, which at its best integrates the role of mind and body, relationships and wider social contexts, is one of the most important developments since the inception of psychiatry.

. . . You’re no stranger to conflict. Many individual psychiatrists seem more comfortable accepting the ‘psychosocial’ as an inevitable part of the bio-psycho-social approach to mental health than do psychologists in accepting the ‘bio’. Would you say that is a fair comment?

I would say we need to be clear what we mean here. No one, whatever their profession or perspective, denies that there are biological aspects of our experiences. All our human experiences are mediated and enabled by our bodies, as we have discussed at length in the PTMF. In that broad sense, a ‘biopsychosocial’ approach applies to everything, whether or not it falls under the remit of ‘mental health’.

But it all depends what role you see for the ‘bio’. TIA is very solidly based on a growing amount of evidence about this aspect – in other words, how our bodies are impacted by overwhelming experiences and as a consequence, how healing can be promoted through working with our bodies not just our minds. This explains the increasing popularity of body-oriented therapies.

It is true that there are now fewer hard-line medical model psychiatrists of the kind I met when I first qualified – convinced that ‘schizophrenia’, for example, was a genetically-determined brain disease and that it was actually harmful to explore people’s unusual beliefs. But including the ‘psychosocial’ aspects merely as precipitants of a medical illness – as the ‘biopsychosocial’ or ‘vulnerability-stress’ models often mean in practice – simply preserves the biomedical approach with minor modifications. It relegates the horrific abuses in many people’s lives to ‘triggers’ which they would have coped with had they not been biologically ‘vulnerable.’ This is both insulting and untrue . . .

In recent years have you found ways to share common ground with even your most strident critics, or is the debate becoming increasingly polarised?

Firstly, this question doesn’t apply just to me: I am one of a large and growing number of people of all backgrounds, including many service users, who are challenging the dominant model. A common rhetorical strategy is to talk about this in terms of individual ‘extremists’ who can be discredited at a personal level. Another strategy is to frame it as a ‘battle’ or ‘war’ between professions – which is untrue, and distracts from the main points. Challenging the core assumptions underpinning our mental health system was always going to arouse strong feelings, and critics are often told that their views are ‘polarising’. Actually, I don’t think the debate is any more polarised than it always has been. What is new is that the arguments are reaching a much wider audience, and that previously marginalised voices are demanding a platform.

Conflict is certainly not comfortable, but every important societal debate is conflictual.

. . . Do you think that to a certain extent conflict is inevitable, and even desirable in terms of driving real change?

Conflict is certainly not comfortable, but every important societal debate is conflictual . . . Critics of the mental health system are arguing that we need a complete change in our basic assumptions. Modifications don’t take us far enough. Extreme distress can’t be both a medical illness ‘just like diabetes’, as we are often told, and at the same time, an understandable emotional reaction to life circumstances.

In PTMF terms, the current debate poses a challenge to power, and as we know, few people or institutions will give up power voluntarily. That includes my own profession, of course. And it includes me. We all need to reflect on the forms of power and privilege we enjoy, and how they can best be used to create a fairer world.” 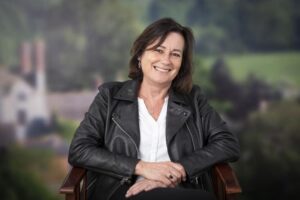