From TODAY: “After one Missouri school district brought back corporal punishment, some parents are opting in on the new policy as a number of students protest.

Dakota Russell, 35, has two daughters, ages 8 and 6, who attend school in the Cassville R-IV School District, located in southwest Missouri.

When Russell and his wife heard about the district’s new policy that allows teachers to ‘use physical force as a method of correcting student behavior’ with the permission of students’ parents or legal guardians, they decided to opt in.

. . . According to the new discipline policy, students can only be subjected to physical force ‘by certified personnel and in the presence of a witness who is also an employee of the district.’ Physical punishment is only to be administered in private, where ‘there can be no chance of bodily injury or harm’ and prohibits hitting children on the head or face.

. . . Studies have shown that corporal punishment does not work and causes mental and emotional harm, including ‘increased aggression, antisocial behavior, physical injury and mental health problems for children,’ according to the American Psychology Association (APA). At least 30 countries have banned corporal punishment, while 19 states in the U.S. permit physical force as a form of discipline in schools.

. . . In response to the newly implemented disciplinary policy, some students have formed Students Against Abusive Policies, or SAAP, according to Cassville High student Kalia Miller.

‘We formed it in order to combat this policy as well as a few others that we think are abusive, archaic and regressive in our schools,’ Miller, 17, told TODAY.

. . . Audrey Goutney, 17, also attends Cassville High School and argues that the new disciplinary policy runs antithetical to the idea that ‘school is supposed to be a safe place for students.’ [Annie Moore, 17] agrees, adding that ‘kids could be being abused and hit at home, or going through self-harm issues.’

One 2021 study found that the [COVID-19 pandemic policies have] led to an increase in corporal punishment, abuse and neglect at home.

‘We’re not giving those kids therapy or the help they need — we’re just resorting to hitting them,’ Moore added. ‘Putting that fear on them is not going to make anything better.’

Goutney’s parents opted in on the policy, she says, so ‘technically I can get spanked.’ She’s concerned that because the policy says ‘use of force’ and not spanking specifically, ‘punishment with pain’ could include the use of an object.

‘As a student that has not consented at all and never will to an adult man —  when I’m almost 18 — spanking me, it is a traumatic experience for me not just as a child but as a woman,’ she added.

. . . ‘The fact that there only has to be two people in the room means there can be two men in the room watching you get spanked on the butt — that’s so embarrassing,’ [said Gabe Moore, 17] . . .

Some students are worried the policy could lead to sexual abuse, especially in the wake of the conviction of a Cassville High School teacher who was sentenced to 30 years in prison for a ‘sextortion scheme.’ The former teacher coerced 11 identified children and dozens more who were not identified into sending him pornographic images and videos.”

From St. Joseph News-Press: “The American Academy of Child & Adolescent Psychiatry advocates for state legislatures to ban the practice.

‘Corporal punishment signals to the child that a way to settle interpersonal conflicts is to use physical force and inflict pain,’ the academy said in a 2014 statement. ‘Such children may in turn resort to such behavior themselves. They may also fail to develop trusting, secure relationships with adults … Supervising adults who willfully humiliate children and punish by force and pain are often causing more harm than they prevent.” 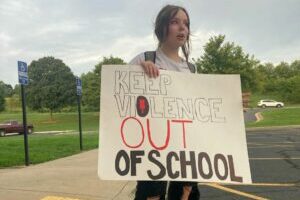