From Jeremy Lent/Resilience: “The nonhuman creatures with whom we share the Earth are being systematically annihilated by the Great Acceleration, as they lose their habitat, get hunted down, or poisoned by our pollution. There has been a 68 percent decline in vertebrate populations worldwide since 1970, with freshwater species such as amphibians registering a jaw-dropping 84 percent loss. Insects have been faring just as badly, with reports of ‘insectageddon’ from some areas that have seen populations crashing toward extinction levels—such as the Monarch butterflies that migrate annually from Mexico to the United States, and have declined by 98 percent over the past thirty years.

There have been five mass extinctions of life in Earth’s history, caused by cataclysms such as volcanic eruptions or meteorite impact. Scientists warn that human activity is now causing species to go extinct at a thousand times the normal background rate, and that if we continue at this rate for a few more decades, we will have triggered the Sixth Extinction . . .

Why don’t we react in unbridled outrage to the devastation of the natural world taking place before our eyes? A major reason is that we don’t realize what we’ve lost. Back in 1968, in a song that became an icon of the environmental movement, Joni Mitchell sang about paving paradise and putting up a parking lot, making the point that you never know what you’ve got until it’s gone. She stirred millions of hearts—but she was wrong. The disturbing reality is that, once it’s gone, people forget they ever had it. Whatever conditions people grow up with are the ones they generally consider normal. This is a tribute to the amazing plasticity of the human mind, but it means that we tend to take for granted things that should never be accepted.

This phenomenon, known as ‘shifting baseline syndrome,’ was first discovered by fisheries scientist Daniel Pauly, who was researching the drastic reduction in the size of catch off the eastern seaboard of North America, which had declined by 97 percent since written records began, although the fishermen remained strangely unconcerned. He realized that each generation viewed the baseline as whatever they caught at the beginning of their career, regardless of how much smaller it was than the previous generation, leading to what he called ‘the gradual accommodation of the creeping disappearance’ of fish populations. Shifting baseline syndrome has since been shown to be pervasive everywhere in the world.

The somber truth is that the vast bulk of nature’s staggering abundance has already disappeared. We live in a world characterized primarily by the relative silence and emptiness of its natural spaces. It’s only when we read accounts of wildlife from centuries ago that we realize how much is gone. One eighteenth-century writer, standing on the shores of Wales, described schools of herrings five or six miles long, so dense that ‘the whole water seems alive; and it is seen so black with them to a great distance, that the number seems inexhaustible.’ In the seventeenth-century Caribbean, sailors could navigate at night by the noise of massive shoals of sea turtles heading to nesting beaches on the Cayman Islands. In the Chesapeake Bay, plagued today by polluted dead zones, hunters harvested a hundred thousand terrapins a year for turtle soup. In the nineteenth century, passenger pigeons would blot out the sun when they appeared in massive flocks throughout the eastern United States. The last one died in a zoo in 1914.

. . . Terminal as extinctions are, the virtual disappearance of most populations of existing species, known as extirpations, are perhaps even more devastating. It’s been calculated that, since the rise of human civilization, Earth has lost 83 percent of its wild mammals, 80 percent of marine mammals, and about half the biomass of trees and plants—a worldwide elimination of life’s abundance that has been aptly named by biologist Norman Myers ‘the Great Dying.’ The species we view as iconic of nature’s magnificence, such as lions, tigers, elephants, and whales—now barely eking out an existence—were once prolific around the world. It’s estimated that, as late as 1800, twenty-six million elephants roved Africa. There are now barely four hundred thousand. The spectacular vista of wildebeest migrating in their millions across the plains of Africa is itself facing extinction, with the few remaining wildebeest finding migration routes blocked by fences, settlements, and roads. And the Great Dying continues at an ever-increasing pace: 2,000-year-old baobab trees that were around when Jesus lived suddenly dying off; three billion animals lost in Australia’s wildfires of 2019–20 . . .

The ideology of human supremacy

It’s rather stunning to consider that all this destruction has been carried out by a species that has been around for less than 0.01 per cent of life’s history; a species that makes up just 0.01 percent of all life on Earth as measured by biomass. While some, such as Ecomodernist Stewart Brand, may glorify [civilization’s] ascendance declaring ‘We are as gods,’ there are other ways to see it. [Civilization] has undoubtedly developed unprecedented power, but much of it has been used for destruction. What would other animals say about [civilization], if they had the opportunity? The animals that still remain on Earth are suffering an apocalypse unlike anything that has occurred in the history of this planet. Other mass extinctions happened through geophysical events that no-one was responsible for, such as volcano eruptions or meteorites. This one is a deliberate and systematic annihilation of life executed by one species with full knowledge of what it’s doing. It may be the Sixth Extinction, but as some have pointed out, a more apt name would be the First Extermination Event.

With the exception of a few hardy survivors such as cockroaches, rats, and pigeons, the animals that have been spared extirpation or extinction are mostly those which have been domesticated, such as cows, chickens, and pigs. But the word domestication doesn’t hint at the reality of their existence. For the most part, these animals are enslaved, brutally tortured, and mercilessly slaughtered merely for human convenience. The ongoing atrocity of the systematic torment administered in the name of humanity to 74 billion animals a year—each one a sentient creature with a nervous system as capable of registering excruciating pain as you or I—must represent the single greatest cataclysm of suffering that life on Earth has ever experienced. It’s most likely, as ecophilosopher Derrick Jensen points out, that if animals could speak, they would tell us that when they see the face of a human, they don’t see a god—they see the devil.

But, of course, they can’t speak, and that is why this ongoing holocaust continues with barely a mention in public discourse. Ever since the rise of agrarian civilizations, cultures have justified their domination over those they conquered by claiming innate superiority. In recent centuries, as Europeans subjugated other regions, a discourse of white supremacy—one that retains its pernicious power even today—asserted superiority over other races. Among those who recognize its toxic qualities, white supremacy is understood as a form of violence that inflicts suffering on others while simultaneously damaging the perpetrator by binding them to a system of brutality. What is less recognized is that the ideology of human supremacy—claiming innate superiority over nonhuman animals—has a similarly malignant effect.

Human supremacy is so embedded within our cultural norms that it is barely even discussed. As ecological philosopher Eileen Crist describes, ‘it is indoctrinated into humans from a tender age, without time-out, hammered into the human mind by innumerable conditioning feats of the dominant anthropocentric culture.’ It is, however, a specific ideology with origins in the Western worldview that desacralized nature, turning it into a resource to exploit. Ultimately, it is the ideology of human supremacy that allows us to maltreat animals in factory farms, blow up mountaintops for coal, turn vibrant rainforest into monocropped wastelands, trawl millions of miles of ocean floor with nets that scoop up everything that moves—while glorying in the Anthropocene, claiming that nature only exists to serve human needs. Because it’s all around us and almost never mentioned, human supremacy is easy to ignore—but once you recognize it, you see it everywhere you look.” 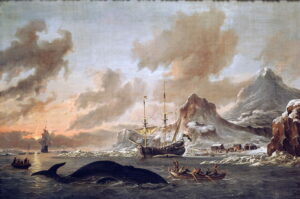