From The Washington Post: “Yale University unveiled sweeping changes Wednesday that will allow students suffering from mental health problems to take time off without losing health insurance or facing a daunting application process for reinstatement — policies that have been under increasing fire from students and alumni.

Under the new policy, students in mental crisis will be able to take leaves of absences instead of being pushed to withdraw, and they can return to classes when they feel ready, Dean of Yale College Pericles Lewis told students in an email.

The policy changes come two months after a Washington Post story detailed students being pressured by Yale administrators to withdraw once the university learned about their mental health problems and then being forced to reapply to get back in.

The story drew on the accounts of more than 25 current and former students, who described a university flush with a $41.4 billion endowment yet beset by inadequate services and punitive policies for those in mental crisis. Many students said they avoided seeking counseling and hid suicidal thoughts for fear of being exiled.

After the story was published, alumni and faculty expressed alarm to Yale administrators. Then at the end of November, current and former students filed a lawsuit accusing the school of systematically discriminating against students with ‘mental illness.’

Yale and other universities are facing an explosion of students struggling with mental health issues. For years, many schools have hustled those students off campus instead of treating them as people with disabilities who are entitled to special accommodations to remain, mental health advocates say.

. . . [Akweley Mazarae Lartey, a senior at Yale who has advocated for mental rights throughout his time at the school, said] ‘What I hope happens beyond a shift in policy is a shift in culture and attitude, so that students who need help aren’t punished for it but supported instead.’” 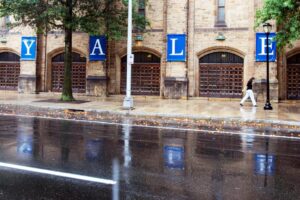