It has been a good time to bury controversy. With all eyes on Washington and the fallout from the publication of DSM-5, over here in England the Institute of Psychiatry has been discretely sending out invitations to a lecture. This is not a public lecture; it is by invitation only. It is the Inaugural Lecture of a new Centre for Affective Disorders. What could possibly be controversial about that, you might well ask? It is perfectly normal for an august institution to invite an esteemed colleague to mark the launch of a new development by giving a guest lecture. This is slightly different. The lecture will be hosted by luminaries of the Institute of Psychiatry. Professor Carmine Pariante will chair the event; the guest speaker introduced by Professor Allan Young, and the vote of thanks proposed by Professor Sir Robin Murray. And who is this esteemed guest? None other than Professor Charles Nemeroff M.D., Ph.D. 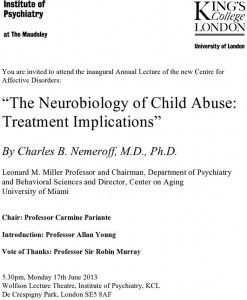 Professor Nemeroff has been featured before on MIA. He is a prominent academic psychiatrist, Leonard M. Miller Professor and Chairman of the Department of Psychiatry and Behavioral Sciences, and Director of the Center on Ageing in the University of Miami. His profile on the University of Miami website documents a distinguished career littered with honours and awards. He was Editor in Chief of the journal Neuropsychopharmacology from 2002 – 2006, and Psychopharmacology Bulletin. He also served as associate editor of two other journals, Biological Psychiatry and Critical Reviews in Neurobiology and Depression. His research interests include the neurobiology of affective disorders, and he has also written about the neurobiology of trauma and abuse.

There are two things you won’t find on Professor Nemeroff’s personal page on the University of Miami website. The first is details of his extensive business interests in the pharmaceutical industry. You have to scour the pages of Bloomberg Business Week to unearth this. Here you will find out that he has had consultancies with various industry leaders, including Forrest Laboratories, GlaxoSmithKlein, Janssen, Merck, Otsuka Pharmacia/Upjohn, Somerset Pharmaceuticals and Wyeth-Ayerst Laboratories 1. He has also served on the scientific advisory boards of most of these companies.

The second thing concerns conflicts of interest. In 2009, an investigation initiated by Iowa’s Republican Senator Charles Grassley found that when Nemeroff was Departmental Chair at Emory University, he failed to report in excess of $1 million income from GlaxoSmithKlein for giving over 250 talks to psychiatrists between 2000 – 2006. During this period he held a grant for $9 million from GSK for a trial of its drug, Paxil. In December 2009 he was dismissed from his post at Emory, and also banned by the National Institutes of Health from applying for research funding for two years. Shortly after this Nemeroff was appointed to his current post in the University of Miami, after Dr. Thomas Insel, the Director of the National Institute of Mental Health, reassured the University that Nemeroff would be eligible to apply for research funding once in post. Senator Grassley subsequently wrote to the Director of NIH, Francis Collins, raising concern about the Institute funding ‘…limited Federal dollars to individuals who have previously had grant funding suspended for failure to disclose conflicts of interest.’2 On taking up his new post in Miami he successfully applied for funding for a prospective study of psychobiological risk factor for PTSD3. In May 2012 Senator Grassley asked the NIH to explain its decision to award Nemeroff this $2 million grant when he was still under investigation by the US Department of Justice.

There is something of the night about Professor Nemeroff, and the darkness in his past can be grasped through reports some years ago of the part he played in the decision by the Centre for Addiction and Mental Health in Toronto to withdraw the offer of a Chair to Professor David Healy4. Professor Nemeroff’s lecture at the Institute of Psychiatry goes under the title of “The Neurobiology of Child Abuse: Treatment Implications”. The question this raises is why is the Institute of Psychiatry so keen to ingratiate itself with this soiled Phoenix. The Director of the new Centre for Affective Disorders, and the person chairing the lecture is Professor Carmine Pariante. Professor Pariante worked at Emory in 2001, when Nemeroff was Departmental Chair5. Is the Institute of Psychiatry courting Nemeroff for financial favors through his links with the pharmaceutical industry? Who knows? We do know, however, that as recently as March 2013 the Institute, in conjunction with the London School of Hygiene and Tropical Medicine, announced nine new scholarships in global mental health funded by Janssen to the tune of almost £300,0006.

British psychiatry is in no sense perfect, but to be fair, the Royal College of Psychiatrists has worked hard to tighten up the egregious relationship between the profession and the industry. After much debate it published a set of guidelines7 to advise psychiatrists about the boundaries in their dealings with the industry, and in particular to ‘…help psychiatrists to achieve probity and transparency in ensuring that their judgement is not inappropriately influenced by commercial organizations’ (p.6) No longer are glossy adverts for drugs to be found cramming the pages of the British Journal of Psychiatry. It is probably fair to say that the foot soldiers of the profession in Britain are now more acutely aware than ever before of the problematics of their relationships with drug company representatives, of the box of Marks and Spencer sandwiches at the promotional film on Tuesday lunchtime, of the pen, the diary, and the travel alarm bearing company logos. Yet on the surface it seems that one of our most esteemed institutions, a centre of academic excellence, is beyond the moral compass that guides the rest of the profession. In the interests of transparency we should be told why Professor Nemeroff has been invited to speak at the Institute of Psychiatry. Where has the funding for the new Centre for Affective Disorders come from? Is it linked to Nemeroff’s appearance and rehabilitation? We should be told.