We are immersed these days in the erroneous idea that only randomized placebo-controlled studies (RCTs) constitute scientific data. We will discuss the origins of the over-reliance on RCTs in a future column. For now, we shall simply assume that many of our readers understand that a well-documented case study can provide information relevant to many.

And so, we would like to tell you about a Calgary-based child who we refer to as ‘Andrew’ (not his real name). Andrew is the middle child of three boys in an intact family, with two parents with professional careers. His two brothers seemed to have a normal developmental course, but Andrew did not. He displayed various learning and developmental problems from an early age, and because it was so atypical in his family, he was evaluated in the local genetics clinic (which found no evidence of any known syndrome). By age 8, after a diagnosis of pervasive developmental disorder was ruled out, he was diagnosed with an anxiety disorder. When he was 10, his anxiety symptoms became quite significant, associated with insomnia, difficulties with activities of daily living, inattention, distractibility, and self-injurious behaviour. He subsequently developed auditory and visual hallucinations, with voices telling him to harm himself. These hallucinations were followed by delusions in which he believed someone was poisoning his food, and that he had committed both murder and adultery. He engaged in obsessive prayer out of guilt for his acts.

Andrew became so ill that he was admitted to a tertiary inpatient pediatric hospital (Alberta Children’s Hospital) where he was evaluated for everything from neurological problems (CT, MRI) to PANDAS (Pediatric Autoimmune Neuropsychiatric Disorders Associated with Streptococcal infections). Everything was ruled out, but he continued to be the sickest case of childhood psychosis ever seen on this inpatient unit even after many trials of psychiatric medication alone and in combination, including quetiapine, risperidone, fluoxetine, fluvoxamine and clonazepam. Andrew was discharged after six months on a regimen of risperidone and fluvoxamine. He returned home, and his care was transferred to the outpatient Mood and Anxiety Disorders Clinic.

Two important notes: 1) At the time of his hospital admission, his Children’s Global Assessment Scale score was 35 out of 100 (indicating very low function); at discharge his CGAS score was still exactly 35. 2) A health economist extracted provincial health care costs of much of his 6 months of hospital care, which conservatively was $158,829.53.

What happened next was remarkable. His parents approached his outpatient psychiatrist Dr. Megan Rodway and asked for her opinion about trying Andrew on a broad spectrum nutrient formula which at that time was called EMPowerplus (EMP), since he had not responded to any medications. Dr. Rodway reports that her response was “It is snake oil, but I don’t have anything better to offer.” And so beginning in September 2008, Andrew transitioned onto EMP while gradually reducing his two medications to zero. Here is the parent report data on his symptoms of anxiety (if you are interested in seeing the graphs of OCD and psychosis, as well as Andrew’s self-report of auditory and visual hallucinations, the reference is provided below): 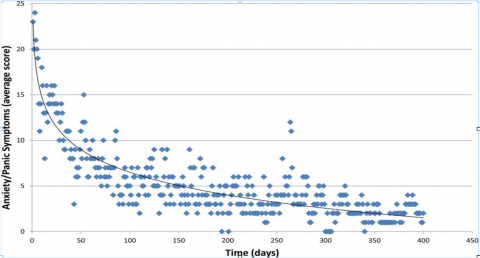 The long-term result was impressive: all symptoms of psychosis and OCD had remitted in a few months. By the next summer, Andrew was able to attend sleep-away camp.

Here are some important questions to ask: 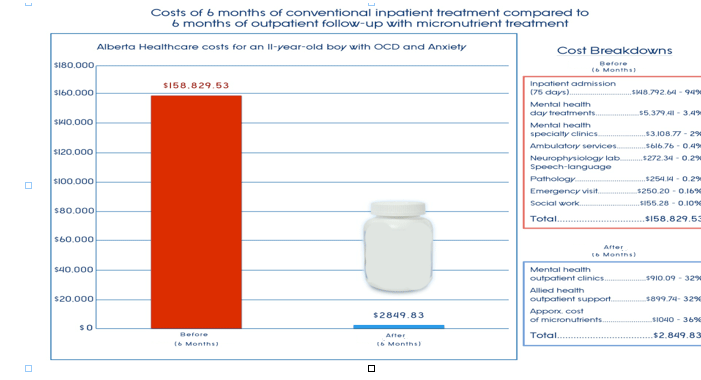 This is our 6th post on nutrition and mental health, and we are attempting to write about many aspects of the broad emerging field of Nutritional Psychiatry. Some of this field includes data on successful nutrient treatments (like Andrew), but other aspects include correlational data from epidemiological surveys, understanding mechanisms by which nutrients affect brain function, diet and fetal development, elimination diets, improved resistance to environmental toxicants and stress with nutrition, etc! Future posts will continue to talk about some of these more ‘academic’ topics, with occasional treatment stories like Andrew interspersed to keep us reminded about the enormous potential of this field.