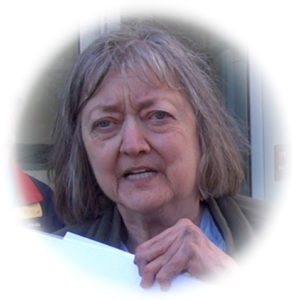 Activist Bonnie Nelson was a force of nature. She and I definitely had our differences. So why am I writing to commemorate her? Among many other reasons, because she would have done the same for me. Bonnie Nelson was a person of principle, and once she decided what was right, the rubber hit the road. Bonnie did her best at all times to do the right thing. Too often she and I could not agree upon what the right thing was, and what is deeply unfair here is that I get the last word. It seems fitting to me that my last word to Bonnie should be the deepest truth, which is that I loved her. I always will.

A vitally active member of the psychiatric survivor internet community, Bonnie reached out from rural Alaska to people all over the country (and world) providing educational resources and support. She started MindFreedom Alaska, and arranged opportunities for attorney Jim Gottstein to speak in community forums. Jim offered these words of praise for Bonnie’s dedication to the causes she believed in: “Bonnie Nelson was a classic activist in the liberal/progressive tradition, including the civil rights movement, gender rights and disability rights. She always pushed the edge of the envelope for more rights. She was well known by the highest Alaska officials, and her absence will leave a void.”

Bonnie struggled all her life with the consequences of a grandfather who had been a victim of brain-damaging psychiatric treatment. One of those consequences, she said, was that she and her brothers grew up believing that emotions were dangerous and should be avoided and hidden. They were forbidden to cry. Bonnie’s ultimate and enduring gifts to the world were her efforts to stop that system… and her faithful love for her two formidable sons, Greg and Daryl.

Bonnie Nelson’s life was forever changed when the first of her two sons came into the world strangling on the umbilical chord that had nourished him. Daryl was deprived of oxygen at birth, long enough that the damage was profound; and Bonnie’s purpose was thrust upon her. At the same time, I believe, Daryl was her angel. Together, Bonnie and Daryl accomplished many feats in exposing holes in systems of “care,” making progress towards necessary accommodations for physically and emotionally disabled people.

This past spring, Anchorage participated in the international protest of electroshock with Bonnie at the helm, and I put her on the spot in front of the camera. “Don’t interview me,” she said… but I could not comply. Bonnie was as well-spoken an advocate as could be found, and so I turned the camera on her and she rose to the occasion. It was the last time I was to see her.

The contributions people make should not be forgotten, and Bonnie was definitely not someone who promoted herself. Since I am that kind of person, I urge readers who knew Bonnie and Daryl to write about her. How wonderful it would be if we honored each other as we deserve to be honored for such dedication and sacrifice.

Bonnie and I both come from the generation that watched President Kennedy’s send-off on national television. We all came together as a community to watch a tiny John-John salute at his father’s grave; we all remember the eternal flame at the cemetery, and we felt the loss of a family member who once said to us (in a time of potential reform, the 1960’s), “Ask not what your country can do for you, ask what you can do for your country.” I believe Bonnie Nelson answered that call, just as I believe that all of us here at Mad In America are really here because we deeply love our country, a country whose founding principle was that individual rights are the basis of a just society. This, I truly believe, is why we are mad in America. We have lost that collective vision, and we come together to remember what we have lost, and move forward. On this, Bonnie Nelson and I agreed wholeheartedly.

I confess that it took me hours to physically recognize, and then allow, my feelings of loss. In the aftermath of six years of difficult psychiatric drug withdrawal, I am noticeably blunted in my emotions, stranded in a collateral damage junkyard. There are times when this translates into a strength of sorts – the ability to listen to personal accounts of (completely avoidable) profound iatrogenic harm, day in and day out, and still get some modicum of sleep. Some people who read MIA write to me asking me where I get my strength, and every time this happens, one my first thoughts is of Bonnie.

Bonnie Nelson was a pillar of strength. I attribute any strength I may have to my children, that same source from whose well Bonnie drank so deeply. Our children deserve better. They deserve every ounce of strength we can muster in these dangerous times.

I hope that people will write, in the comments below, some of their memories of Bonnie’s generosity, her considerable intelligence, and passion; because I know that many of you have them. Bonnie Nelson touched many lives in her efforts to be the change we dream. I would appreciate this as a tribute to Bonnie and a gift to her sons, Daryl and Greg, in this time of grief.