Eugene Raikhel reveals ads from 1966 where Ritalin, now prescribed largely for ADHD, was marketed as a “kind of mind antidepressant for housewives.”  “I also find striking that—unlike what you find in contemporary ads for anti-depressants—the woman in this ad doesn’t look particularly happy in the ‘after’ shot. She’s just steadily peeling away, fulfilling her housewifely duties, looking almost as miserable as she does in the first image. It almost lends itself too easily to the critique made of Ritalin in connection to ADHD since the 90s: that it is used as a means of fostering self-disciplining subjects capable of fulfilling expected social roles.” 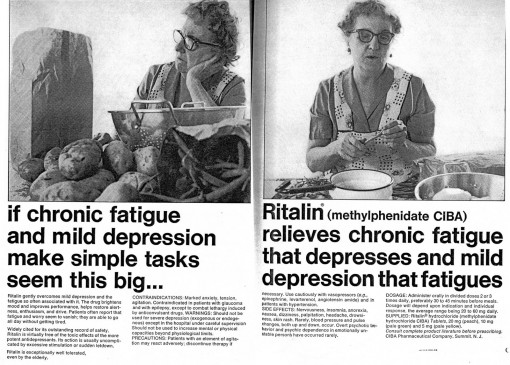