An international group of researchers from multiple disciplines has published a historical, qualitative, and quantitative investigation into voice-hearing in women. The interdisciplinary project, freely available from Frontiers in Psychiatry, explores how sexism, exploitation, and oppression bear on women’s experiences of hearing voices.

“Auditory verbal hallucinations,” or “hearing voices,” has been most commonly associated with schizophrenia since the mid-twentieth century. However, hearing voices is now understood to occur in people given various diagnoses for mental illnesses as well as in a small percentage of individuals who do not meet any other criteria for such psychiatric diagnosis.

The researchers provide a detailed examination of the historical understandings of women’s voice-hearing, both before and after the medicalization of the experience at the advent of modern psychiatry. They emphasize that, for a variety of historical reasons, women voice-hearers were often required to have their voices legitimized and interpreted by men. In the medieval period, for example, voice-hearing was often associated with either divine communication or demonic possession. “In the accounts we do have,” they write, “women are often justifying why, in a male dominated society, God should be speaking to women.”

Unfortunately, this trend continued into the advent of modern psychiatry. As male priests and religious leaders had previously been in charge of interpreting female voices, “the practice of medicine relied upon male physicians writing case histories that explicated the causes and cures for women’s ailments like hysteria.” These historical case formulations reveal that these early psychiatrists, “despite encountering clear evidence of child and adult sexual abuse in a large number of female patients,” failed to recognize the connection between physical and sexual abuse and voice-hearing. Later, Freud claimed to have discovered this connection but then changed his mind.

The researchers argue that for many women, our modern psychiatric interventions and explanations (psychotropic drugs and the biomedical model) continue to make opaque the role that patriarchal exploitation, sexism, and oppression play in the emergence of women’s voice-hearing.  These obscuring explanations remain, despite the fact that many studies have documented the association between trauma and sexual abuse and the development of voice-hearing.

“This opens up an understanding of women’s voice-hearing not as a symptom of madness or disease, but of a patriarchal society that attempts to control women’s bodies,” they write. “In a rape culture, voice-hearing is inevitable.”

To attempt to understand better the experiences of women hearing voices today, the researchers undertook a qualitative study (interpretive phenomenological analysis) and identified the common themes in women’s descriptions of their voices. They then organized a quantitative study to compare the nature and meaning of voice-hearing in men and women. Their exploratory results indicated that “the form, content, interpretation, and antecedents of voice-hearing appeared to be influenced by gender,” and that the experiences relayed by contemporary women “echoed, in a variety of ways, women’s historical experiences of voice-hearing.”

“In conclusion,” the researchers wrote, “it appears that sexism, sexist exploitation, and oppression have engendered voice-hearing in women, and influenced aspects of its form and content. Despite, at times, deliberate obfuscation of abuse as a causative agent for voice-hearing, this continues to re-emerge in the narrative of psychiatry as women continue to assert the validity of their experiences. Patriarchy is an overlooked structural factor in relation to voice-hearing, and a greater focus on this, as well as other distal causes, is long overdue.”

Four Decades of Allying to Make Safe Spaces for All Voices: The Hearing Voices Network 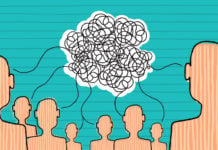