In this piece for The Atlantic, Chris Millard discusses how increased medical, psychiatric, and psychoanalytic scrutiny of motherhood in the 20th century set the stage for Munchausen syndrome by proxy, a rare form of abuse in which a caregiver fabricates and/or induces illnesses for those in her care.

“Feminists have long been aware of the risks of putting motherhood on a pedestal. In the case of MSbP, the belief in the importance of dedicated and conscientious caregiving was in fact what made it possible for the disorder to exist, and to attract so much scandalized attention. There’s no doubt that the amount of ink spilled over MSbP seems wildly out of proportion with the number of cases discovered. But what the story of MSbP reveals is the potency and perniciousness of norms around mothering, and how unpredictable their consequences are.” 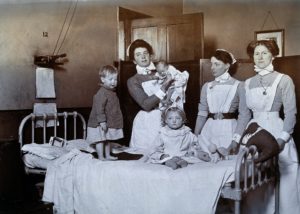