From The New Yorker: In a new book, The Dangerous Case of Donald Trump, a group of mental health experts warn the public of Donald Trump’s troubling mental state. Their work raises questions about whether diagnosing and evaluating the mental health status of political leaders may endanger democracy.

“No one of sound mind would suspect Trump of being a visionary. But is there an objective, value-free way to draw the very subjective and generally value-laden distinction between vision and insanity? More to the point, is there a way to avert the danger posed by Trump’s craziness that won’t set us on the path of policing the thinking of democratically elected leaders? Zimbardo suggests that there should be a vetting process for Presidential candidates, akin to psychological tests used for ‘positions ranging from department store sales clerk to high-level executive.’ Craig Malkin, a lecturer at Harvard Medical School and the author of ‘Rethinking Narcissism,’ suggests relying on ‘people already trained to provide functional and risk assessment based entirely on observation—forensic psychiatrists and psychologists as well as “profilers” groomed by the CIA, the FBI, and various law enforcement agencies.’ This is a positively terrifying idea. As Mark Joseph Stern wrote in Slate in response to last December’s calls for the Electoral College to un-elect Trump, it ‘only made sense if you assumed as a starting point that America would never hold another presidential election.'” 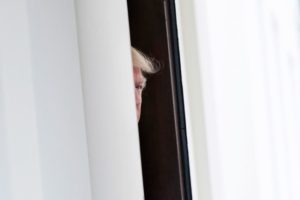