In this piece for The New York Times, John Williams praises the work of philosopher William James, who played an important role in studying and describing the inner states of people of faith. James’ work illuminates our innermost fears and desires that compel us to believe in something greater than ourselves.

“Four of the most memorable lectures in the book — two each on the subjects of ‘healthy-mindedness’ and the ‘sick soul’ — consider these two categories of people at length: those whose disposition is ‘organically weighted on the side of cheer’ and those who are depressive or congenitally pessimistic, to be brief. These chapters are my personal D.S.M. I consult them to find beautifully articulated reasons to go easier on myself and other people, and to expect more from all of us at the same time; to feel the fullness and complexity of both our vulnerabilities and our capabilities.

Sick souls range from the easily irritated (think Larry David) to the self-loathing (Charlie Brown) to the pathologically melancholic (Tolstoy, who wrote: ‘Is there in life any purpose which the inevitable death which awaits me does not undo and destroy?’). It feels safe to say that most of this book’s devoted fans — and it has many of them, as one learns — are sick souls. In creating a taxonomy of them and sympathetically describing their needs, James makes them feel, to use modern psychological parlance, seen.” 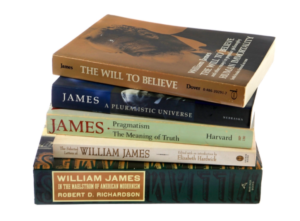