From Open Culture: The intellectual culture of the academic humanities has increasingly come under attack by those claiming that leftist academic work is solely focused on “political correctness,” “identity politics,” and “thought policing.” The journal Radical Philosophy challenges these critiques by presenting a much more nuanced, complex picture of academic work, publishing a wide range of perspectives on a variety of issues; the journal’s archive is now available online.

“You can now read for free all of these essays and hundreds more at the Radical Philosophy archive, either on the site itself or in downloadable PDFs. The journal, run by an ‘Editorial Collective,’ still appears three times a year. The most recent issue features an essay by Lars T. Lih on the Russian Revolution through the lens of Thomas Hobbes, a detailed historical account by Nathan Brown of the term ‘postmodern,’ and its inapplicability to the present moment, and an essay by Jamila M.H. Mascat on the problem of Hegelian abstraction.

If nothing else, these essays and many others should upend facile notions of leftist academic philosophy as dominated by ‘postmodern’ denials of truth, morality, freedom, and Enlightenment thought, as doctrinaire Stalinism, or little more than thought policing through dogmatic political correctness. For every argument in the pages of Radical Philosophy that might confirm certain readers’ biases, there are dozens more that will challenge their assumptions, bearing out Foucault’s observation that ‘philosophy cannot be an endless scrutiny of its own propositions.'” 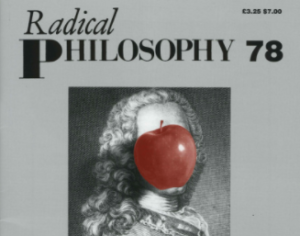