From Psychology Today: The American Psychological Association has previously taken a number of steps to take responsibility for its involvement in torture and make amends to those who were harmed. However, the organization’s governing body is now considering undoing some of those efforts.

“There are now items up for a vote by APA’s governing body, the Council of Representatives. The first would have APA undo its stance on removing military psychologists from ‘Guantánamo Bay detention facility, “black sites,” vessels in international waters, or sites where detainees are interrogated under foreign jurisdiction “unless they are working directly for the persons being detained or for an independent third party working to protect human rights’ or providing treatment to military personnel.”‘ (text from NBI 23B passed by Council in August, 2015) The governing body is considering pretending that this statement does not mean what it clearly says, and implying that it really means that military psychologists can provide treatment to detainees, while not working directly for the detainees, but working for, and being paid by, the military-security complex. It is blatantly obvious that providing care arranged by the client is quite different from providing care paid for by the entity that sees the client as its enemy.

Perhaps even more consequential for psychologists’ relationship with the public, there is an item under consideration that would remove the report regarding APA’s failures–a report prepared by an independent reviewer hired by APA– from APA’s own website. This attempt to ‘See no Evil’ should give us all pause. Psychologists developed, implemented, and oversaw torture. APA failed to provide ethical leadership to stop these actions. This should horrify us all. And in our horror, we should all be demanding that APA take actions to be sure it never happens again–not take actions to bury this history. Instead, our colleagues on the governing body are considering hiding this sordid part of our history. That would be an act of cowardice and stupidity.” 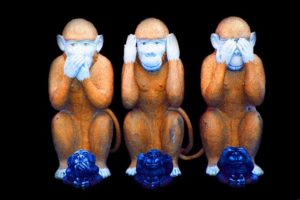