In this piece for Aeon, Sam Haselby explores the parallels and intersections between Freudian psychoanalysis and Islamic mysticism.

“The affinities between mystical Islam and Freudian thought are clear, and deep. But did Islamic thinkers make these connections between psychoanalysis and Islam? They did, often pointing to the shared traditions of dream interpretation, as well as the shared technique of understanding texts and dreams through the relationship between the latent and manifest meaning of religious knowledge. Islamic thinkers also recognised the uncanny resemblance between the analyst-analysand and the shaykh (or spiritual master)-disciple relation in Sufism. The mid-20th-century Egyptian Abu al-Wafa al-Ghunaymi al-Taftazani, a shakyh of a Sufi order and later a professor of Islamic philosophy and Sufism at Cairo University, began writing about Sufism in the 1950s. He was widely read in Egypt and beyond, and he often compared Sufism and the psychoanalytic tradition.” 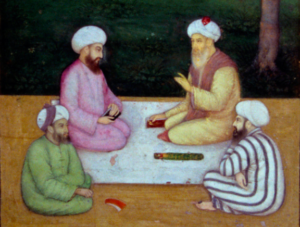