From Aeon: “In Nach Am Leben (I’m Still Alive), the Australian animator and illustrator Anita Lester reflects on the harrowing and tragic life of her late great-aunt Eva Nagler, who survived the Holocaust, but was never truly able to escape its horrors. Over dreamlike animated vignettes and a haunting score, Lester recalls how her aunt was ‘born into a destiny unhinged,’ losing most of her family to the Nazi persecution of the Jews while still young, including her beloved older sister Sonia, who died on top of her while shielding Eva from bullet fire on a death march. Despite surviving, Nagler found little relief after the war. Unable to make sense of what she had experienced and witnessed, her torturous memories drove her to bouts of mental illness and, ultimately, into an asylum. In telling her aunt’s story, Lester considers those Holocaust survival stories for which there is no redeeming ‘Hollywood filter,’ and how, continents and decades away from the Holocaust, her family is still shaped by its persistent trauma.” 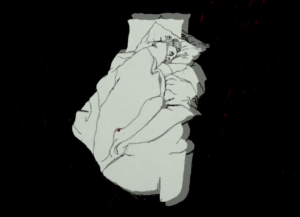