A new study, published in PNAS, finds that quantitative research in psychology and the social sciences is “worryingly imprecise” and that generalizations based on this data may be flawed and misleading. The researchers, led by Aaron J. Fisher at the University of California, Berkeley, used a complex statistical analysis to compare group differences with individual correlations.

“We provide evidence that conclusions drawn from aggregated data may be worryingly imprecise,” Fisher writes. “Specifically, the variance in individuals is up to four times larger than in groups.”

The usual approach in quantitative research examines large-scale group differences, comparing the means (averages) between large groups. Often, the data appears to clump together around the mean, which seems to indicate that most people in the groups have a similar response.

However, Fisher’s research found that when individual-level data is examined, this clumping effect dissipates, and the correlations found are much less significant.

Fisher provides the example of a study examining typing speed and number of typos made. At the group level, the finding is that the faster the typing speed, the fewer typos were made. That happens because the best typists were both faster and more accurate. Thus, the conclusion could have been that one should type faster because then one is less likely to make a typo. However, this is obviously false. Instead, on an individual level, the faster any one person types (no matter their skill level), the more typos they will make. When individual-level data is considered, the conclusion reached is the exact opposite of the group-level correlation.

Fisher argues that most quantitative research in the social sciences falls prey to this type of error (called the ecological fallacy, or Simpson’s paradox, with slightly different connotations). According to Fisher, these findings “threaten the veracity of countless studies, conclusions, and best-practice recommendations.”

“Even in the best-case scenario, we should not think of a correlation in group data as an estimate that generalizes to any given individual in the population. Stated bluntly, this implies that the temptation to use aggregate estimates to draw inferences at the basic unit of social and psychological organization—the person—is far less accurate or valid than it may appear in the literature.”

The following graphs, from one of the studies about depression, show that the group data (in blue) clustered at a high correlation, indicating that—for instance—depressed mood and anhedonia (inability to experience pleasure) were usually found together. However, the individual data (in red) is spread much more widely, and its average point is at a much lower correlation—indicating that there is a great deal of variance in whether these two traits are actually found together. 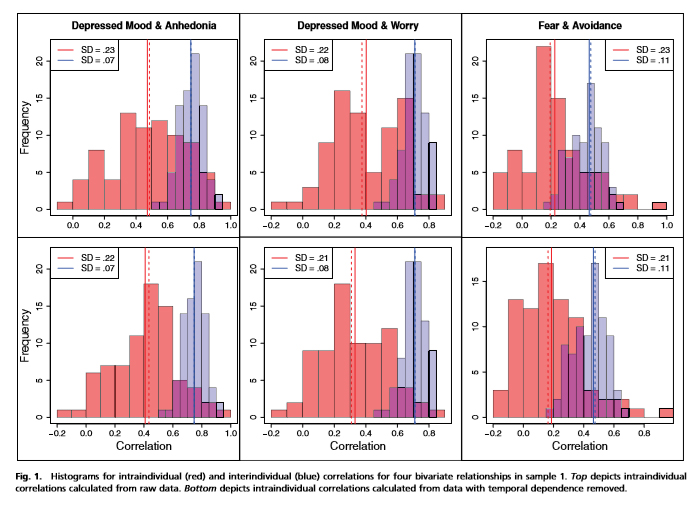 The researchers provide the following example taken from one of the studies in their analysis: the gold-standard therapy for phobia anxiety, exposure, is based on the finding that, in general, anxiety and avoidance are highly correlated. However, on an individual level, there is a broad range of variation falling along a spectrum, from individuals who show very little avoidance when they are anxious, to individuals who have a medium amount, to individuals who are very avoidant when anxious. Thus, although the average finding supports the use of anti-avoidance therapies, such as exposure, the individual finding certainly does not support that theory as a universal truth.

Fisher and his colleagues suggest that future research needs to use these analytic techniques to determine if the individual results support or belie the general findings, before concluding that the findings could be applied to individuals.

How Do Science Journalists Choose Which Studies to Report?