According to new research, between 2013 and 2014, 38.4% of adults took a medication that lists depression as a potential side effect, and 9.5% received three or more such medications. About 23.5% took a drug that listed increased suicidality as a side effect. The researchers found that the use of these drugs was associated with people developing depression and suicidality.

“Use of prescription medications that have depression as a potential adverse effect was common and associated with greater likelihood of concurrent depression,” the researchers write. 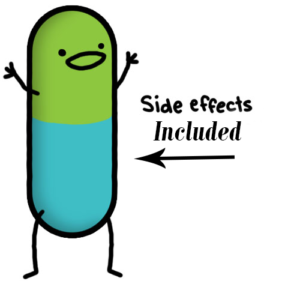 The research, published in the Journal of the American Medical Association (JAMA), was led by Dima M. Qato, PharmD, MPH, PhD, at the Department of Pharmacy Systems, Outcomes and Policy, University of Illinois at Chicago, and also included Katherine Ozenberger, from that same institution, as well as Mark Olfson, a psychiatrist and public health specialist from Columbia University, New York.

Numerous medications include depression and suicidality as a potential side effect, including hormonal contraceptives, beta-blockers, proton pump inhibitors, anti-anxiety medications, and, paradoxically, “antidepressants” themselves.

The researchers found that rates of depression were higher in those taking medications that listed depression as a side effect. They controlled for numerous other factors, including gender, race, age, education level, socioeconomic status, marital status, employment, and multiple medical conditions (e.g., hypertension, cancer, diabetes, and many others).

The authors also controlled for potential confounds and reverse causality by using a statistical method called sensitivity analyses. For instance, the researchers conducted additional analyses to test if removing those who used psychotropic medications would alter the outcome, or if removing those who had hypertension (which is also associated with depression) would alter the outcome. In all of these cases, the association between medication use and depression continued to be statistically significant.

These results indicate that even when removing potential confounding cases (such as other psychotropic drugs, or people with illnesses linked to depression), there was still a link between medication use and the development of depression.

According to the researchers, some of these medications are available over-the-counter (such as proton pump inhibitors and emergency contraceptives) in the US, and their packaging is often not thorough enough to describe the association of these drugs with depression and suicidality. Thus, consumers may not be aware that the medications they are taking could be responsible for their altered emotional state.