From The New York Times: “Sometime that evening, the van, carrying Ms. Green and Wendy Newton, another woman being transported to a mental health facility, was overtaken by the flooding waters of the Pee Dee River. The two sheriff’s deputies in the van managed to get out, said Sheriff Phillip E. Thompson of Horry County in a Wednesday afternoon news conference. The women did not.

By the time emergency workers arrived by boat and found the deputies on the van’s roof, it was too dark to dive. The van, with Ms. Green and Ms. Newton inside, remained in the waters by Highway 76 overnight. Their bodies were recovered Wednesday evening.

For the families of the two dead women, there was one big question: How could the state take someone in, ostensibly to make her better, to protect her even from herself — and then let her drown by the side of a highway?

‘Why the hell would they leave a safe, dry area to go to God knows what?’ asked Allison Newton, Wendy Newton’s daughter. ‘Something feels wrong about this.'” 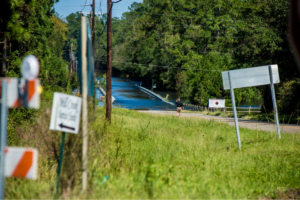 Officer May Have Driven Around Flooded Road Barriers, Killing Patients